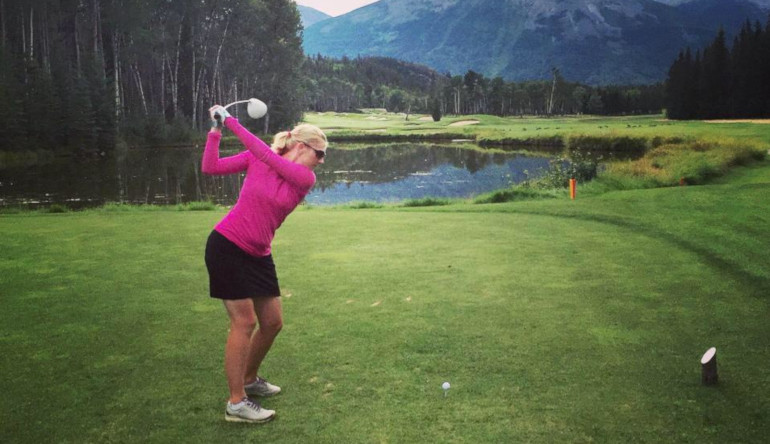 Kim Valleau is a Class A pro in Calgary originally from Nipawin.

The year was 2002 when Nipawin’s Kim Valleau won the Saskatchewan junior girl’s championship, 18 years later the now Calgary based Class A Professional is still succeeding in the sport.

Valleau, 36, was recently nominated for the Alberta PGA Assistant Professional of the Year for the second time. She wasn’t named the winner but said just to be nominated was a great honour.

“It’s pretty cool, I think we have about 500 PGA of Alberta members and to be able to get into that top-five and be recognized for the work you do is a really great feeling,” Valleau told Golf Saskatchewan. “Especially being a female a lot of people don’t know who you are and get tucked away to the side. It’s really nice to be recognized.”

She looks back fondly on her junior days of golfing in Saskatchewan including a runner-up placing in the 2001 junior championships before winning the next year. Valleau stayed in Canada to pursue her education playing golf at Mount Royal University in Calgary. She now works at the Winston Golf Club and is proud of the work she does and other woman professionals. She said the future is bright for woman wanting to be employed in the sport.

“It’s tough being a female in a very male dominated industry. There’s a lot of advantages and disadvantages but as long as you are confident and willing to learn I think anyone can do well in the industry,” she said.

After discussing the award nomination and her recent success Valleau reminisced about her junior golf days and growing up in the province. Current Evergreen Golf Club President Kevin Duchscherer said Valleau is the best golfer the town has ever produced. Valleau’s parents still call Nipawin home and play regularly, Valleau’s earliest memories are her being about four years-old riding the cart with her mom and dad. High school golf took off for Valleau and she eventually worked at the Evergreen and Waskesiu over the summers while attending Mount Royal. She said the smallness of Saskatchewan is what she remembers most.

“Everyone helps each other, and everyone knows each other,” she said. “There is pros in Alberta I don’t know or haven’t even heard of, there’s just so many. I still look at the PGA of Sask. and I say, oh I know them, they were a junior golfer. If pros from Saskatchewan come to Alberta they always say, oh do you know so-and-so, Tyler Baker for example? Oh I know Tyler, I played ping pong in his garage. Yeah, me too! It’s just a small world.”

Valleau won the juniors at the Meadow Lake Golf Course. She also won the Saskatchewan Mixed Championship twice. She won in 2002 with Lee Fairbairn and in 2005 with Nathan Morgan, another junior golfer from Nipawin. She said the people she’s met and the acquaintances she still has today are what she remembers most about her home province.

“We had a really good group of juniors in Nipawin, we all went to tournaments together. Someone always had a camper or trailer and we were camping with a group of friends I grew up with. I also met so many from other cities like Saskatoon and Prince Albert, you got to know everyone who played junior golf and it was awesome,” she said.

Calgary has now been home for nearly half of Valleau’s life, but she still makes it back to Nipawin every summer and has her annual round with her dad (pictured above) and Head Professional Derek Tallon plus a few of her dad’s friends. She’s made it back every year since 2009.

Valleau finished this season ranked 39th on the Alberta PGA Top-100 Program that recognizes all aspects of their profession.