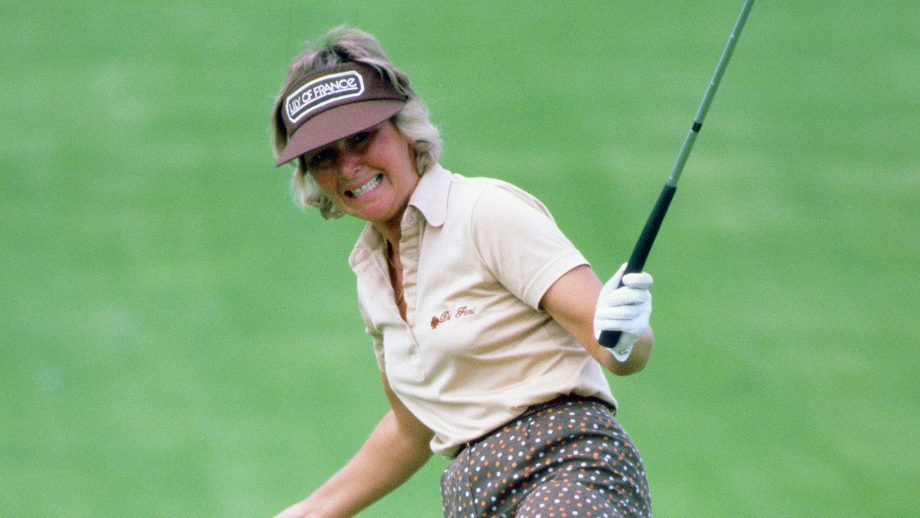 UNSPECIFIED - CIRCA 1978: Women's golfer Sandra Post in action during tournament play circa 1978. (Photo by Focus on Sport/Getty Images)

Canadian Golf Hall of Fame member Sandra Post turns 70 this week and celebrates another milestone this month as well – the 50th anniversary of her first LPGA Tour win.

Reflecting back, Post, who has had a lengthy list of accomplishment in her career including winning the Lou Marsh Trophy as Canada’s athlete of the year, twice winning the Canadian Press Female Athlete of the Year, and appointed to the Order of Canada, says winning the LPGA Championship, a major in her first try, is what’s been the focal point of her on-course legacy.

But with 50 years now passed, Post realizes she had a greater mission off the course to help promote and advance the status of women in sport.

“It wasn’t just sport,” she says. “I knew that early on. I knew there was other issues to it.”

Post says she hasn’t grasped how monumental her major win was until this anniversary has come up. She won a couple of tournaments later in her career that have since become majors (Post won the ANA Inspiration twice, when it was known as the Colgate-Dinah Shore Winner’s Circle and not yet a major) but didn’t realize then that majors really define one’s career.

“Those moments live with you,” she says. “If you’re a U.S. Open champion or an LPGA Champion… it really is fabulous.”

Post was just 20 years old when she teed it up in the 1968 LPGA Championship at Pleasant Valley Country Club, about an hour outside Boston.

She finished at 2-over after 72 holes, tied with Kathy Whitworth – one of her idols and who, up to that point, had won 27 times on the LPGA Tour (she would go on to win 88 times in her career, the most ever) – and there would be an 18-hole playoff to decide the champion on the Monday.

Post remembers calling her father back in Toronto to say there was going to be a playoff the following day and he caught the last flight to Boston on Sunday along with some members of the Canadian press corps who had just finished covering Bob Charles win the Canadian Open at St. George’s.

Post wasn’t able to sleep that night, so she jumped in her car and drove to Boston to pick up her dad. The members of the press who were also on the flight couldn’t believe Post, who was about to play the biggest round of her life, was there at midnight to drive the two-plus hours back and forth from Boston, but she says she had nothing else to do so decided to make the trip.

At a dinner earlier that night, she remembers sitting with Mickey Wright (World Golf Hall of Fame member and 82-time LPGA Tour winner) and Susie Berning (four-time LPGA Tour major winner) and asked what would she need to do in order to beat Whitworth the next day.

“I remember Susie saying, ‘fire everything you’ve got at her, right off the top. And I go, ‘Really? Ok.’ I’ll never forget those words,” says Post.

“I didn’t really have a strategy but I was thrilled to death I was going to finish second at the LPGA Championship,” she continues with a laugh.

Huge crowds had showed up for this David vs. Goliath match-up, Post says. She remembers her caddie being a young teenager, maybe 14, and their combined ages barely eclipsed Whitworth’s age of 29 at the time.

Post started the day with three straight birdies, but Whitworth made an eagle and a birdie in the first four holes and they were tied.

“I looked up on the hill after the fourth hole and I saw Susie and I said, ‘That’s all I got! Now what do I do?” says Post. “She just put her hands up.”

As the day chugged along, it looked like a foregone conclusion that Post was going to be the champion, extending her lead to five shots at one point.

But Wright was already one of the winningest golfers on the LPGA Tour, and Post wasn’t going to count her out. However, late in the round it was all but settled Post was going to win.

Post had dunked her approach from 90 yards out on the par-4 15th for a birdie to get to 7-under for the day. When they got to No. 17, Whitworth ended up in the trees with her tee shot. She couldn’t make it out, made quadruple bogey, and Post would go on to win by seven, finishing at 5-under to Whitworth’s 2-over.

Post won a “whopping” US$3,000 in first-place prize money, the most she had ever won at one time. She says she still has a copy of that cheque.

“I had a bonus with Spalding too. I got in my car and went down the road to Baltimore (where the next event was) thinking I was pretty rich,” she says, laughing.

Looking back on that victory 50 years ago, Post says there were a ton of great memories on the course, but it was off the course where she really learned her place in the world.

She knows they were playing for money and needed money to make a living, but all the women on the LPGA Tour at the time were trying to elevate the status of women in sport, and says they were all very conscious of their role in that.

Post says the voting for the Lou Marsh Trophy in 1968 was a big point in her realization that she needed to do more for the advancement of women in professional sport. She finished fifth in the voting that year.

“I took that very seriously. I was Rookie of the Year, I had won a major, and I was the first Canadian woman to really play golf professionally and get to that level. For a woman to play any sport professionally, and to see I was ranked fifth… I didn’t ever think it wasn’t fair, but I knew I had so much more work to do,” she says. “I had to get the message across to our country.”

Post says it was an honour to pass the baton in Canadian professional golf to Gail Graham and Dawn Coe-Jones, and then to see them pass it along to Lorie Kane and A.J. Eathorne, who then passed it to Alena Sharp and Brooke Henderson.

She’s happy to see there has been more done in women’s golf on the scholarship side and with purse increases on the LPGA Tour, and has no doubt Henderson is going to end up passing the baton sooner rather than later, given the talent on the LPGA Tour is getting younger and younger each year.

“I see the social issues and I see so many things we’ve been able to achieve. Absolutely we have a lot of work to do with the disparity of the purses and all that, but I tend to look more on the positive side,” she says.

At 70 Post remains as sharp as ever. Her victory half a century ago was the turning point for Canadian women’s golf and opened the door to many others who followed. And although she was a “young 20” when she found the winner’s circle, she says being a part of that group of women was something she’ll never forget.

“When I look back I have such admiration for those founders of the LPGA Tour and what they accomplished. Talk about pure pioneers of not only golf, but of women. To help move the needle for women,” she says. “I would not trade my time for any other time.”