Salazar runs away with MJT win at Elk Ridge 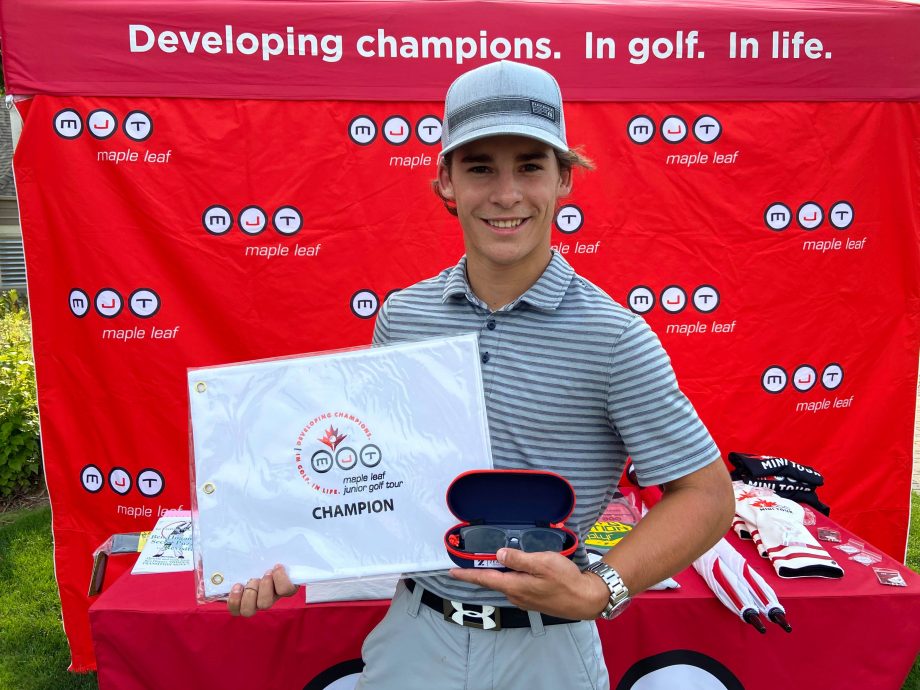 Guillermo Salazar was the overall low shooter at the MJT stop at Elk Ridge this past weekend. Submitted photo - Jeff Chambers
Clark Stork

Waskesiu’s Guillermo Salazar didn’t have far to carry home his prize pack from the Maple Leaf Junior Tour’s (MJT) stop in Elk Ridge over the weekend.

Making the shortest commute to the resort for the 36 hole tournament, Salazar posted rounds of 69 and 74 to win the junior boys and overall championship at the event.

Chase Pochyko, coming off an extremely busy July placed second at 150 with back-to-back 75’s while his Saskatoon counterpart Jackson Wingert was just a shot behind Pochylko at 151 (76, 75).

Regina’s Luke Cote and Micah Tangjerd of Saskatoon were tied for fourth at 153.

Saskatoon’s Tommy Danielson was a winner again on the MJT this year, he fired rounds of 71 and 80 for a two day total of 151 to claim the juvenile boys category.

A familiar name could be found at the top of the bantam boys age group after the event, Elias Haukeness of Buena Vista was a winner by three shots.

Haukeness posted a 77 on day one followed by a 79, his 156 kept him ahead of Kerr Cudmore who placed second at 159 (82, 77). Ryan Mosher of Saskatoon and Sucker River product Dade Bernatchez tied for third at 160.

Saskatoon’s Aricin Franklin is finding success this season on the MJT circuit. The 12-year-old ran away with the peewee boys category winning by eight shots. Franklin shot 82 in round one but chopped eight shots off on day two for a 156.

Chloe Wills of Kyle used back-to-back rounds of 89 to win the under-15 girls division at Elk Ridge. Wills’ score of 178 was 10 shots better than Niya Friesen of Swift Current. Friesen carded a 91 on day one, she shot 97 during round two.

Saskatoon’s Sarah Grieve has another MJT title to her lengthy junior resume. She shot 75 during round one and followed that with a 72 for a 147 and first place.

The complete results from the MJT event can be found here.