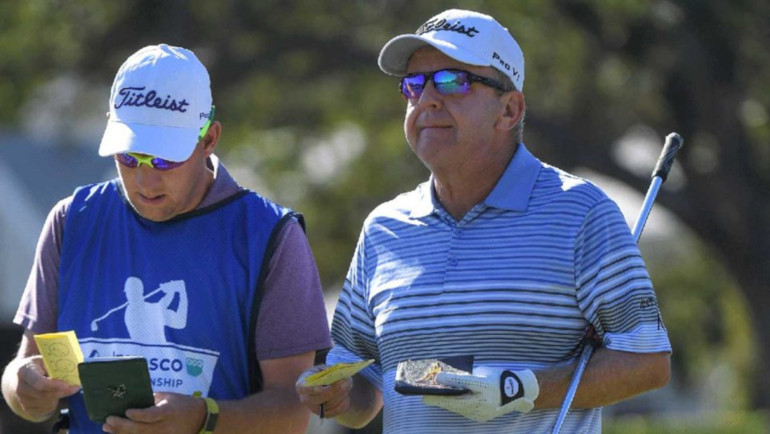 We’re going to dive into the pro ranks again for this edition of the rule of the week.

Last week we detailed an unfortunate incident on the LPGA Q-Series, this week we investigate an incident at the PGA Tour Champions Schwab Cup Championship. Billy Mayfair opened the event with a sparkling round of six-under, 66 but his second round wasn’t as clean. In fact a pair of Rules violation led to the veteran player’s disqualification from the event.

After hitting his ball into the rough on a par 5, the 11th hole at Sherwood Country Club Mayfair used the assistance of his playing partner, his caddie, and spectators to find his ball. He thought he found it and hit it within the three-minute allotment. Before striking his ball he asked a Referee if the ball was embedded, it was deemed not to be. Mayfair carded a seven, a double bogey on the hole.

He rebounded and posted five straight pars before complications on the 17th hole.

Laying on a severe upslope in grass about four inches long Mayfair put his 60-degree wedge behind the ball, it moved, about six inches. Mayfair believed he didn’t cause his ball to move, the television crew felt differently. He finished the hole with a bogey four.

Mayfair was confronted by a referee following the round, once questioned about the time of his search on the 11th hole, he was then interrogated for the ball movement on hole 17. He admitted his actions moved the ball causing a two-stroke penalty.

After posting a 76 during Friday’s round Mayfair realized he needed to go low in Sunday to be a factor. He never got the chance; Mayfair was informed by Rules officials the search for his ball on hole 11 took 4:50 seconds. He was disqualified.

Remember under the 2019 Rules:

(1) Making Stroke at Wrong Ball. A player must not make a stroke at a wrong ball.

Exception – Ball Moving in Water: There is no penalty if a player makes a stroke at a wrong ball that is moving in water in a penalty area or in temporary water:

In stroke play, the player must correct the mistake by continuing play with the original ball by playing it as it lies or taking relief under the Rules:

The second Rules infraction on 17th may also be concerning, because he stated, “he did not cause the ball to move, and then retracted it later saying he did.” Under Rule 9.4b is where we find the ruling if Hole 11 didn’t happen first.

9.4 Ball Lifted or Moved by Player

This Rule applies only when it is known or virtually certain that a player (including the player’s caddie) lifted his or her ball at rest or caused it to move.

b. Penalty for Lifting or Deliberately Touching Ball or Causing It to Move

If the player lifts or deliberately touches his or her ball at rest or causes it to move, the player gets one penalty stroke.

But there are four exceptions: and you can review them here.

Overall, Mayfair may what to do a quick refresher on the new code and prepare for his next event.