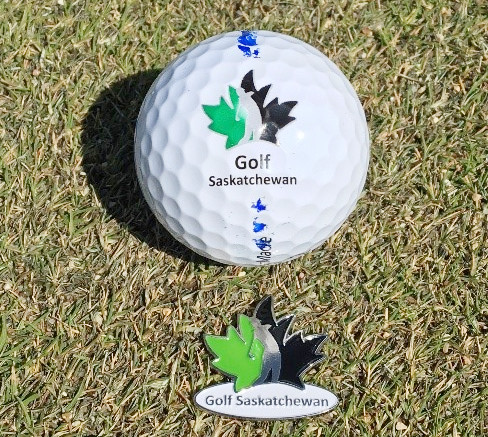 Rule 6-5 – Lines or arrows used to mark your ball?

QUESTION: It is recommended placing an identification mark on my golf ball. May I use a line or an arrow that will also help me align the club face?

ANSWER: Rules 6-5 (the player; ball) and 12-2 (searching for and lifting the ball) state that each player should put an identification mark on his ball. Thus, the rules do not limit the type of markings a player may put on the ball (i.e. arrows, lines, words, etc.). Additionally, there is no penalty for using such lines to “line up” prior to a stroke on the putting green or any place else on the course; à except the items below.

QUESTION: A ball is buried in the rough. Dave announced his intention in advance to his opponent, marker, or fellow competitor. The player, for the reason to identify the ball, touches and rotates it. In doing so Dave identifies the ball as his ball. Is there a penalty?
ANSWER: Yes, for touching the ball other than as provided for in the Rules (Rule 18-2). Under Rules 12-2 and 20-1, a ball may be lifted (or touched and rotated) for identification purposes after its position has been marked. If the Dave had marked the position of the ball before rotating it, there would have been no penalty, assuming the rotating did not result in the ball being cleaned beyond the extent necessary to identify it.

QUESTION: May a player draw a line on his ball and, when replacing his ball, position the ball so that the line or the trademark on the ball is aimed to indicate the line of play?

QUESTION: A player rotates his ball on the putting green to line up the trademark with the hole. He did not lift the ball, mark its position or change its position. Is there a penalty?

ANSWER: Yes, one stroke for touching the ball other than as provided for in the Rules (Rule 18-2). Under Rules 16-1b and 20-1, a ball on the putting green may be lifted (or touched and rotated) after its position has been marked. If the player had marked the position of the ball before rotating it, there would have been no penalty.

Happy golfing and remember the Rules of Golf Matter