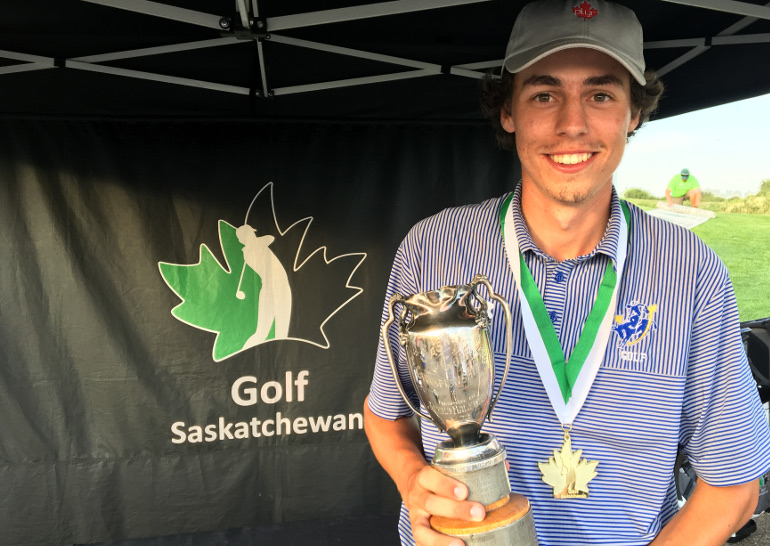 66 was the magical number Thursday for the Saskatchewan Men’s Amateur and Mid-Amateur Champions.

“It feels unbelievable. I got off to a tough start today, but I battled through. I had a good back nine, it kind of turned around on hole six and it kept going. It feels awesome,” Johnson said.

The Deer Park Municipal Golf Course member, who plays at Southern Arkansas University didn’t have his best day during round one when he shot 75. Johnson rebounded in round two setting himself with a shot at the championship going into the final 18 holes.

“I thought I was playing really well, I just didn’t make any putts. I just played a little bit smarter and battled through,” he said.

Johnson’s three-round total of 207 was two shots better than Humboldt’s Michael Herperger who also fired 66 in the championship round to take second place. David Stewart led the first two days of the tournament but couldn’t hold off Johnson and Herperger in the final round. Stewart, 32, finished in third with 210.

Herperger’s (above) score vaulted him over Stewart for the Mid-Amateur championship. Herperger came from a 10th place tie after the second round to win the over-25 title.

“It’s awesome, I’m at a loss for words,” he said. “It’s been great this week at the Dakota Dunes.”

Johnson wasn’t eligible for the Mid-Am due to his age, Jehremy Ryde finished third behind Stewart. Herperger, a Humboldt product said the win is extra special following the Broncos bus crash in April.

“It means a lot to me, it hit very close, I did this for a lot of people, I hope they can come to Nationals with me,” Herperger said.

Golf Saskatchewan changed their Amateur and Mid-Amateur format this year, in year’s past the tournaments were held at separate venues and times. Over 120 golfers competed for four spots in the national championships.

Johnson, Herpeger, and Stewart plus Ty Campbell who won in a playoff to secure a spot on Team Saskatchewan will play at the Amateur Championship. Herperger, Stewart, Ryde and Mitchell Matichuk, also a playoff hole winner will compete in the National Mid-Am Championship later this summer.

A complete recap of the tournaments can be found here.