Rookie honours for Dudas; podium finishes for Schmidt and Nagy 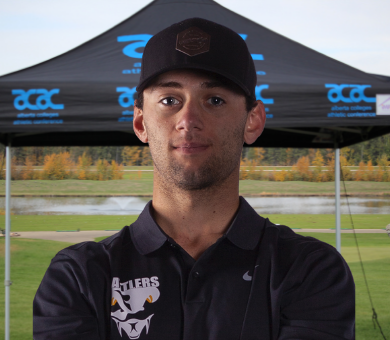 Estevan born golfer Jayden Dudas has been named the 2021 Alberta Colleges Athletic Conference (ACAC) Rookie and Male Golfer of the Year after his first year at Medicine Hat College.

Dudas recently won the ACAC Championship after a three-round score of 213 (74, 69, 70) at the Alberta Springs Golf Resort. Dudas was three shots better than fellow Saskatchewanian and teammate Colby Friedrich. Friedrich, from North Battleford posted rounds of 72, 74, and 70 for a 54-hole total of 216.

The team won the championship at plus-14. Both Dudas and Friedrich will compete in the Canadian Collegiate Athletic Association in Windsor, Ontario starting on Oct. 12.

(*Golf Saskatchewan will hear from both players following their appearances at the national championship.)

Josh Nagy has his best college event under his belt. The Saskatoon product finished tied for third at the Tom Tontimonia Invitational in Lakewood, Ohio on Oct. 4 and 5.

Nagy drained nine birdies over the two days of the tournament to finish with a two-round score of 140 (71, 69). He helped the Colonials place seventh overall in the event. Nagy and his Robert Morris University teammates will travel to Lewisburg, Pennsylvania on Oct. 10 – 12 for the Bucknell Invitational.

Roman Timmerman has another college top-20 performance on his resume after the Saskatoon born Southern Arkansas University Mulerider placed in a tie for 19th at the Battle of the Belt in Hot Springs, Arkansas on Oct. 4 and 5.

The senior shot rounds of 74, 72, and 73 at the Hot Springs Country Club. As a team the Muleriders placed third out of 11 teams.

The teams next event is the Tulsa Cup in Tulsa, Oklahoma on Oct. 25 and 26.

The University of Arkansas at Monticello also competed in the Battle for the Belt this week including Prince Albert’s TJ Baker. The second-year Weevil carded rounds of 78, 80, and 79, good enough for a 52nd place finish. The team placed ninth overall at the 54-hole tournament.

Next up for the Weevils is the Sixth annual Ranger Fall Invite on Oct. 18 and 19 in Enid, Oklahoma.

Prince Albert golfer Josh Guthrie was in action for the University of Alberta on Oct. 4 and 5. Guthrie competed in the Can West Championships at the Squamish Valley Golf Club. Guthrie shot rounds of 76 and 79, he placed in a tie for 33rd at plus-11.

Regina’s Alex Schmidt had another solid performance for the Lewis-Clark State College Warriors on Oct. 2 and 3 at the Culturame Classic. Schmidt led the team and placed third overall in the event with a three-over-par 147 (71, 73).

The Warriors team also placed third at the event. The squad will finish the Fall season at the Bushnell Invitational on Oct. 17 and 18.

Other Saskatchewan student-athletes in action over the next few days are Will Danielson (Oct. 7), Jacob Kydd (Oct. 8-9), and Connor Scissons (Oct 11-12).