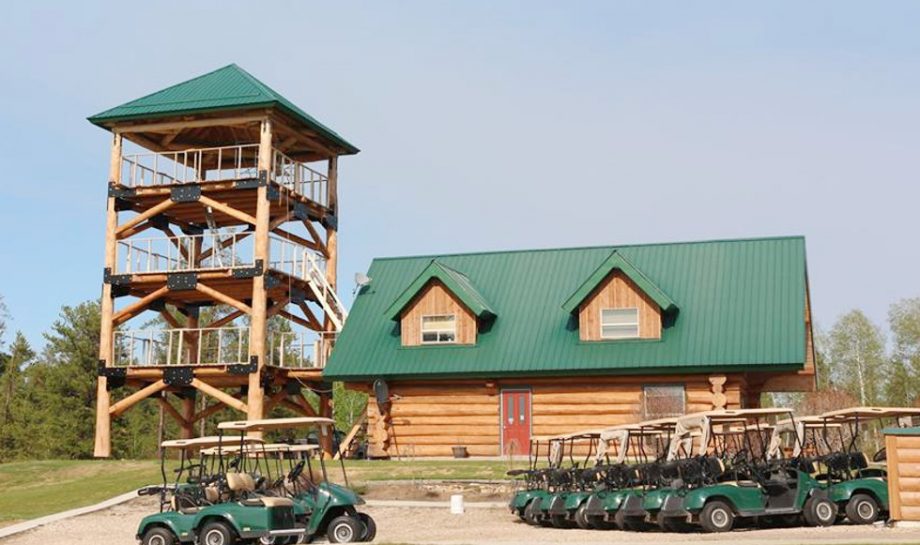 Tucked into the trees north of Nipawin is the Rolling Pines Golf Course, a nine-hole grass green facility privately owned by the Arnst family.

Larry and Debbie Arnst are into their 11th season owning the course carved into a pine ridge in Saskatchewan’s forest. The couple has had a successful decade long tenure owning the course but this year they wanted to add a feature not seen around many clubs. Years prior to the Arnst’s opening the course, they saw a tower built onto a clubhouse at a course in Mexico. Larry shelved the idea until this year, with some help from an employee at the course and other volunteers they constructed a 50’ high lookout tower. He said they wanted something that would stand out.

“It’s something unique that will hopefully pull the people in. Where we are we are kind of at the end of the line for most traffic in Saskatchewan, so we thought if we want to make this a success we need to be unique,” Arnst said.

The tower consists of three floors, the top one is approximately 35’ above the ground. The tower is constructed from local spruce trees, some 20” to 30” in diameter. The structure isn’t quite complete, the stairs are built but need to be attached, the railings are yet to be finished and the floors will be liquid-proofed. Arnst said the idea is for people to enjoy the view of the course and surrounding scenery while enjoying a drink or meal. A meeting space is also something they are contemplating. Arnst said the tower is a great compliment to their rustic layout.

“A lot of land movement, there’s a lot of up-and-down, it’s deceiving because all the farm land around it is flat. For every up there is a down, some of our downs really go down. It’s not your basic flatter style course, there’s also lots of trees that some people curse and others like,” he said.

The Arnst family runs a smaller operation but Larry does have dreams of expanding to 18 holes. He has done some preliminary work on more fairways but for the time being he said it’s not financially feasible.

“We have one of the prettiest nine-hole courses in the province and if we went to 18 it would be the same just because of the lay of the land,” he said.