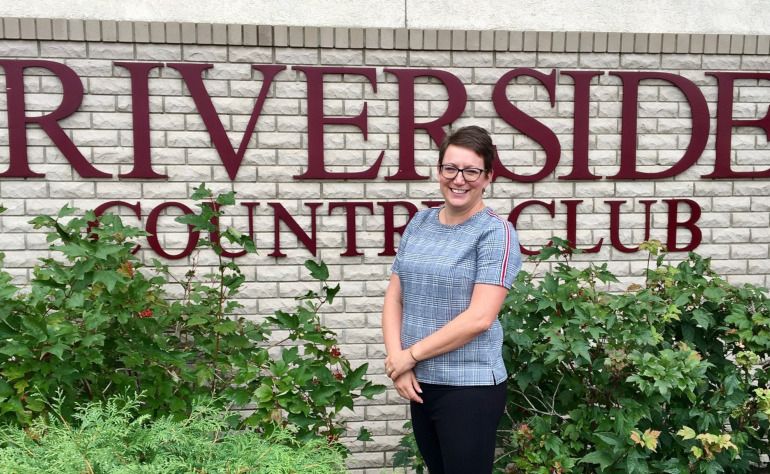 The process was seven years in the making but Riverside Country Club Executive Director Jana-Lyn Fairbairn is a certified club manager.

The designation is authorized by the Canadian Society of Club Managers (CSCM) and consists of four Business Management Institute (BMI) courses. The classes are a week long that Fairbairn attended at Ryerson University in Toronto. She took her first course in 2012 and has worked at the distinction since. She said aside from advancing her knowledge of golf club management she said working alongside other managers was a large benefit.

“The thing that’s really cool about it because, when you go to one of these BMI’s or even doing the review course and exam in Atlanta you talk to other general managers about their clubs and their structure and challenges and opportunities. Lots of the work is group work coming up with presentations and simulations and case studies and that kind of stuff, so it opens your eyes to so much more than the five key problems at your club,” she explained.

The BMI’s consist of about 10 core competencies such as leadership, board, member, and general manager relationships, communications, marketing, operations and maintenance, human resources, strategic planning, and accounting. Fairbairn said expanding on these skills is important, but she reiterated the networking is crucial.

“We had a board meeting recently at Riverside, a couple questions came up about something. I sent a quick email to a couple GM’s, one in Victoria and one in Winnipeg, in five minutes I had some feedback and different ideas and kind of a different way to think about it and that’s huge too,” she explained.

Fairbairn joined Glencoe’s Jan Bloemraad and Paul Chambers from the Toronto Golf Club in receiving the distinction this year. The exam she eluded to earlier was complex and she’s happy to have the designation.

“It’s a huge relief,” she said. “The final step is the exam and I had to go to Georgia State University for that. It’s a 400-question multiple choice exam and it covers the 10 competencies; you must pass each and have over 80 percent as a total. It’s a really stressful exam, it’s an eight-hour exam, it’s intense.”

She is currently the lone Saskatchewan club manager and one of 70 across the country to have the distinction. Fairbairn will receive her certificate at the CSCM national conference in London, Ont. later this fall.