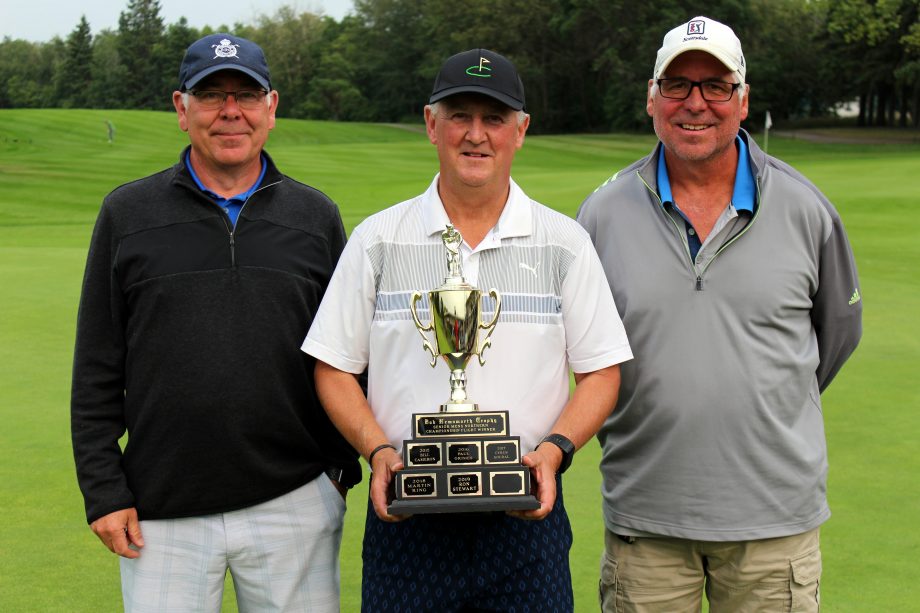 Since entering the Senior Men’s Northern tournament at the Cooke Municipal Golf Course in 2018, Prince Albert’s Martin Ring has been a contender every time out.

After winning the event in his debut and earning a fourth place result in 2019, Ring hoisted the Bob Hemsworth Trophy for the second time on Thursday after earning a four-shot victory in the championship flight over Saskatchewan’s current senior men’s provincial golf champion Rick Hallberg of Weyburn.

“It’s very special to have my name on the Bob Hemsworth Trophy,” Ring said. “The Hemsworth family and I go back a long way. We were neighbours when we were kids and Mr. Hemsworth put in a lot of work here with the senior men’s golf club.

“We had the year off in 2020 due to COVID-19 and it was nice to have a full field again with a great group of golfers.”

Ring’s tournament played out similar to his 2018 triumph as he shot an opening round of 69 on Wednesday to take a two-shot lead over Bill Cameron.

The co-winner of the 2021 Senior Men’s Lobstick at Waskesiu followed that up with a round of 71 on Thursday.

“It was a little bit different than 2018 as we were still in the midst of our irrigation project and we ended up playing on a couple of shorter holes,” Ring said.

“I almost had a similar finish though where I stumbled at the end, but I was able to make a great bogey to finish out the round on a strong note.”

Ring will now be looking to get in as many rounds as he can before he competes at the 2021 senior men’s nationals, which will be held in La Malbaie, Que. from Sept. 21-24.

“My wife (Andrea) and I are going to be heading up to Candle Lake next weekend for the provincial mixed championship and after that it’ll be a lot of practice rounds to make sure I’m keeping my game in shape a little longer, in addition to keeping an eye on what the (Prince Albert) Raiders are doing heading into this season,” Ring joked.

Garry Hagen, Brad Phelps and Doug Kozak rounded out the top five in the championship flight, while 2019 winner Ron Stewart finished in third place in the third flight event.

“I’ve been coming up to play at Cooke since I was 15 years old,” Scissons said. “It’s always a treat to come up and play here and there are so many great people here at the course.

Like Ring, Scissons moved out into the lead on Wednesday with a round of 76 and followed that up with an 80 on Thursday.

“I started yesterday with a double bogey on the first hole, which is a terrible way to start a game of golf, but I had a pretty decent day after that,” Scissons said.

“I was trying hard out there today but I just wasn’t able to find it. I put together a decent score for an old man, but I would have preferred to have played a little bit there than I did in the final round.”

Thursday’s other flight winners were as follows: