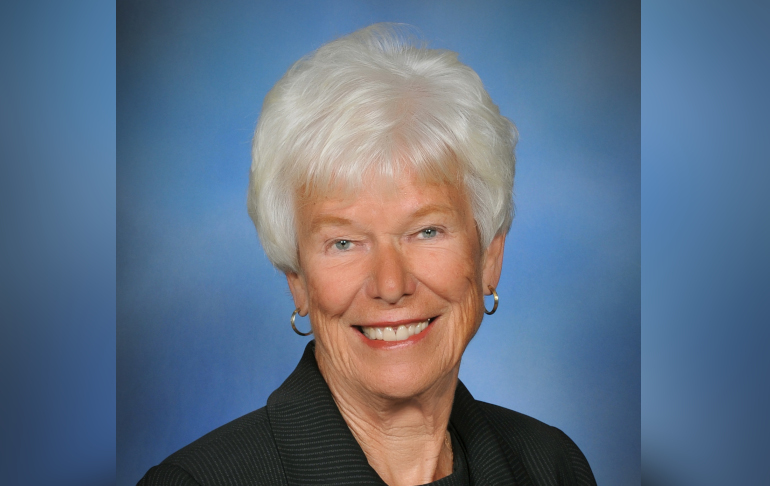 One of Saskatoon’s, Saskatchewan’s, and the nation’s best female athletes are being remembered. Pat Lawson passed away on Oct. 10, a month shy of her 90th birthday in Saskatoon.

Lawson dominated the provincial sporting scene for most of her storied life. From the time she was 10 years old into her senior years Lawson was a regular on podiums golf, tennis, speed skating, basketball, track and field, and swimming.

“The golf and sport world mourn the passing of Pat Lawson. She was a pillar for the advancement of women in sport. She will be missed but never forgotten.”

It is with profound sadness, a great sense of loss and heavy hearts that the family announces the passing of Patricia (Pat) Lawson which occurred on October 10, 2019, in the Palliative Care unit at St. Paul’s Hospital in Saskatoon with family and friends by her side. Pat had been on oxygen for the past year due to fibrosis of the lungs, and in February the PET scan confirmed cancer in both lungs. She remained relatively active (worked in the garden) until she “lost the game in overtime”. Pat was born in Saskatoon November 18, 1929 to William and Irene (Chater) Lawson. Pat was predeceased by her parents and her only sibling Ruth Nase. Pat is survived by Barbara Dorsey and by nieces Deborah Mumby, Sandra Nase, nephew Steven Nase and their children: Ryan Mumby, Stephanie DeBray, Brendan Nase (Mary, Reginald), Derek Nase (Leanne, Quinn, Elliott) as well as several other cousins and her dog Ludy. Pat will also be dearly missed by the many friends, colleagues, students, past players she coached (who affectionately referred to her as “the Queen) and many community members she had a connection with and many of whom to this day say how her leadership, coaching skills and athletic prowess has helped form a big part of who they are today.

Pat’s first athletic competition was a swimming race at age 10 – which she won. Over the course of her athletic career she won Provincial titles in six sports – swimming, speed skating, track and field, tennis, basketball and golf. At the National level she won Canadian titles in basketball, speed skating and with the senior golf team. Internationally she was a member of the Canadian Basketball team at the 1959 Pam American Games. At the University of Saskatchewan, she represented the U of S on 13 teams over four years [basketball (4), swimming (4), tennis (3), track and field (2)]. In golf, in addition to her skill in making seven hole in ones, she competed nationally seven times as an amateur and 12 times as a senior, she won the senior provincial championships five times and notably won the Waskesiu Ladies Lobstick five times over four decades.

Pat was truly among the leaders in Canadian women’s physical education. Her central and unyielding purpose was to improve the conditions and practice of sport and physical recreation for girls and women. In the day, she was one of the few women to have served on the Federal Government’s National Advisory Council to the Fitness and Amateur Sport Directorate, including serving as chair for one year. Her leadership resulted in the formation of the Canadian Women’s Intercollegiate Athletic Union.

Pat’s quiet dignity, her professionalism, HUMILITY, loyalty and generosity brought her uncounted friends who remained fiercely loyal to her throughout her life. And we cannot omit her delicious sense of humor. It was said, by one of her former players, we have never known anyone so loved, admired and respected. That could easily have stimulated an extra-large ego, but not in Pat. For all her astonishing accomplishments, we all remained so impressed with her modesty. As coach, guide, mentor and beloved friend, Pat belongs in a special niche in many people’s heart. Heaven has just gained a star athlete, a coach, a leader, a community builder and above all else a phenomenal person.

And as in life with her modesty and humility, in her death, she has requested there will be no funeral or celebration of life. Her choices are exactly what one would have predicted, dignified and thoughtful to the end. Her wish, in lieu of flowers is for people to donate to the Palliative Care ward at St. Paul’s Hospital. You can donate online at St. Paul’s Hospital Foundation. The staff there were incredible, and Pat and Barb were so dismayed to hear there are only 12 palliative care beds in Saskatoon for situations like Pat’s where true dignity and care at end of life are of the utmost importance. Thank you to all the staff in the Palliative Care; thank you to Dr. Veronica Marcoux for your great care of Pat in the final year of her life; for all your advice, friendship and caring, you were great; and a huge pat on the back to Dr. Shanna Fenton who looked after Pat for years. To all the neighbours and friends who have helped physically on the farm and brought food and reach out to help, I can’t say thank you enough. For the help and commitment from our adopted family Lynne Lacroix and Pat Nicholson they are extraordinary and the rock. Pat’s final resting place will be at Hillcrest Memorial Gardens, in a niche overlooking the pond with a feeling of being out in the country, just the way Pat loved it.