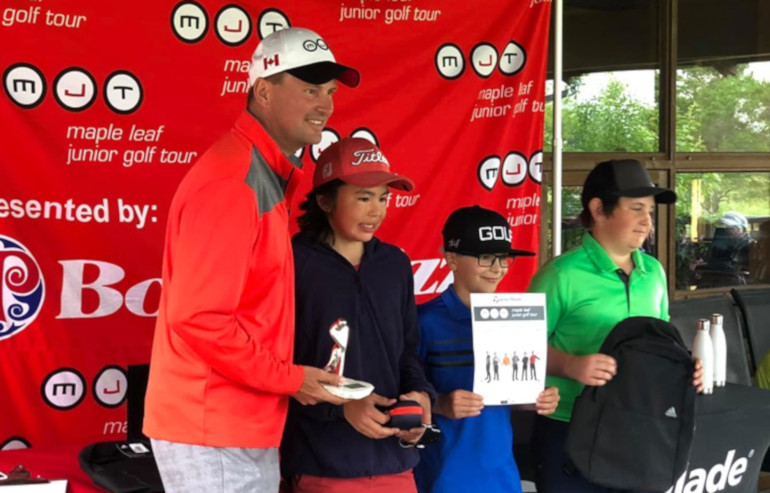 Rain may have washed out one of the rounds at this weekend’s Maple Leaf Junior Tour (MJT) in Swift Current but 68 golfers took part in the event at the Chinook Golf Course.

In the MJT portion of the tournament 47 golfers took part across five different age groups. Regina’s Will Blake, 15, was the overall low shooter with a score of 70.  The Royal Regina Golf Club member was eight strokes better than Saskatoon’s Hudson Malinoski and 11 shots ahead of Chase Pochylko of Saskatoon in the boy’s juvenile (15 – 16) division.

Steven Duchscher of Saskatoon was the winner of the 17- and 18-year-old age group. He shot 73 on Sunday to hold off Kindersley’s Kyler Cote by two shots. Medicine Hat golfer Sam Bratvold, Cole Jenkins of Prince Albert and local product Griffin Wilson tied for third at 76.

In the bantam (13 and 14) category it was Alex Swinnerton taking the victory. The Saskatoon product shot 74, five shots lower than Weyburn’s Darien Herlick. Thomas Danielson (Saskatoon) and Brett Leonard of Corman Park tied for third with rounds of 80.

In the youngest age group, the peewee boy’s division (under 12) La Ronge’s Dade Bernatchez won his first MJT event with a round of 87. 10-year-old Jayden Chernoff of Estevan was second with a 92. Orkney golfer Cashton Yaremko carded a 99 to finish third.

Regina’s Autumn Neiszner was the lone female in the event, she shot a round of 82.

The event also featured a round for younger golfers on the MJT Mini Tour. 21 players entered the tournament, the youngest being six-year-old Forest Wiebe of Swift Current.

He finished third in the under-eight category with a 112. Austin Nesbitt of Pilot Butte won the age group with a 94, Kellen Ross of Shaunavon was second at 108.

In the 9 – 10 boy’s division Jack Maharaj of Saskatoon won with a 90, 17 sots ahead of Quinn Cote of Shaunavon. Kyle’s Jace Wilson placed third with a round of 129.

Coben Taylor of Saskatoon won the 11 – 12 division with a round of 82. A pair of Eastend golfers tied for second, Jace Egland and Blake Girard posted a round of 88. Shaunavon’s Lyndron Ross shot 96.

Five girls were in the field broken up into two age groups, 9 – 10-year-olds and 11 – 12. Saskatoon’s Grace Odnokon won the younger division with a round of 111. Chloe Wills from Kyle shot 105 to be victorious in the older group.

All the Mini Tour results can be seen here.

The Saskatchewan MJT event is June 29 – 30 at Moon Lake Golf and country Club.