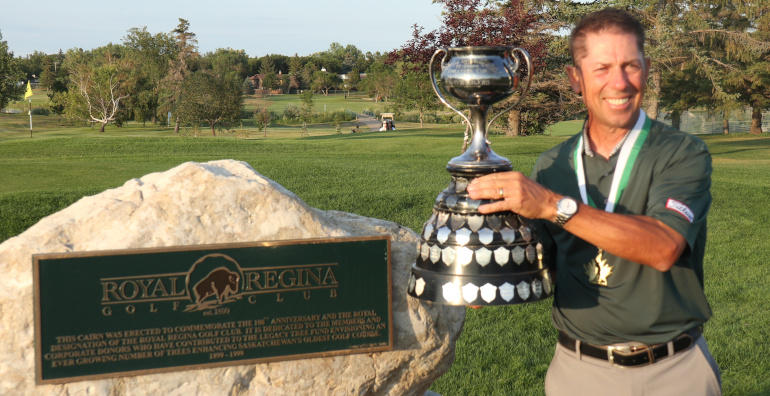 Rodgers had a four shot lead going into the final 18 holes but Wotypka, who plays out of the Elmwood Golf and Country Club in Swift Current wouldn’t make it easy on Rodgers making up the strokes to force the showdown. Rodgers said the victory didn’t come easy.

“The challenge today was playing against really tough competitors,” he said after the win on hole 16. “Brent just hung in there all day, made putts and made it tough on everybody. It felt even more rewarding than a couple years ago coming out of a battle like I came out of today.”

The 18th hole was the first one the pair played in the playoff. Both hit perfect drives and followed each other onto the green with their second shots. Looking at similar birdie putts they both missed. With about three feet left Rodgers missed again and putted in for bogey. Thinking he had let the championship slip through his hands Wotypka couldn’t drop the par putt either forcing another hole.

“The way Brent putted all day I knew he was making that putt; I couldn’t believe it,” Rodgers said. “I was speechless when he didn’t make it. I felt bad for him but that’s golf, you never know what’s going to happen.”

Rodgers won with a par putt on the par-three 16th hole.

Colin Coben had the round of the day shooting two-under, 69 to vault himself into third for a bronze medal and national team spot. Rick Hallberg, the 2018 champion was five-over in round three, he finished in fourth and will be the alternate on the team at nationals in Scarborough, Ont. from Sept. 20 – 22.

Three-time senior men’s champion Ken Bradley of Moose Jaw was the Legends (75 +) winner at the event at plus-19.

Rick Hillestad of Saskatoon was the top 65 and older competitor playing from the championship tees with a score of 16-over par. He receives an exemption into the Canadian Senior Championship as well.

Kim Walker returns to golf, and the podium

Regina’s Kim Walker took a break from competitive golf but is back and has her first provincial championship since she claimed the 2016 Saskatchewan Women’s Amateur.

The senior championship didn’t start well for the Wascana Country Club member, sitting at nine-over par through the first nine holes but she battled back shooting one-under during the second round and plus-six on Thursday to win by 12 shots over Tammy Bezaire. Walker said the win is special following a long layoff.

“I got off to a really bad start,” she laughed. “It was nice to come back solid and play a really great round Wednesday. It was tough today; I knew Tammy was going to come out strong and I knew she’d have a good day, so I knew I had to keep up with her and play well. It’s great to be back playing again, I’m really happy to be playing and part of this tournament.”

Despite the rough start that included a nine on hole six during day one she knew there was lots of golf left to play.

“I thought I could claw my way back, it’s hard to have a confident swing after having a bad hole like that. I thought just put it behind me, there’s still lots of holes left,” she said.

Walker came into the championship round with a 10-stroke lead over Bezaire, the 2015 champion. Despite the wide margin it wasn’t until the 18th fairway that she felt the win was coming.

“Having taken a nine myself I know how quickly a five shot swing could happen so; I never took it for granted. When I was driving on 18 I figured I had this in the bag. I think if I played match play with Tammy I’d be fine,” she said.

Bezaire, who hails from Hague, finished comfortably in second at 29-over par to take the silver medal. Swift Current’s Kathy Hopfner edged Regina’s Debra Duncan and seven-time winner Lorie Boyle to claim bronze. Boyle, who was inducted into the Saskatchewan Golf Hall of Fame in 2017 battled through an injury all week and bypassed a playoff for fourth place and the alternate position on Team Saskatchewan.

The Canadian Senior and Mid-Amateur Championship will be in Osoyoos, B.C. from Aug. 18 – 20.

Price is Wright in Mid-Master’s Championship

A relatively new championship to Golf Saskatchewan, the mid-master’s category for players over 40 was implemented in 2018 allowing for the top three players to receive an exemption into the Canadian Mid-Amateur Championship.

Regina’s Tyler Wright was the winner with a score of three-over par. The 2016 Saskatchewan Mid-Amateur champion outlasted Brad Phelps and Colin Coben by three shots to be eligible for his first national appearance since 2017.

Phelps and Coben were forced to play a playoff to decide second and third place. Phelps, who plays out of Holiday Park Golf Club in Saskatoon defeated Delisle’s Coben on the second playoff hole to claim silver. Despite Coben being eligible for the senior championship he entered the mid-master’s category as well. He is eligible for the national mid-amateur as well as the senior nationals.

The mid-master results can be found here.

The national team rosters will be released in the near future.