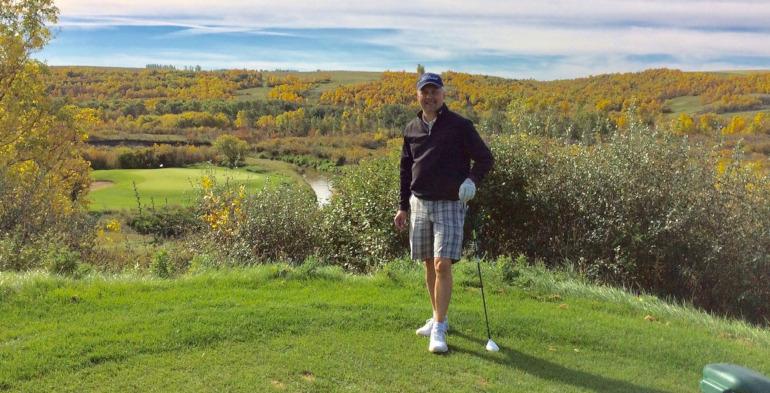 With what started as a casual golf conversation over coffee with a co-worker, Blair Lothian took it upon himself to get an eye-witness account of every 18-hole, grass green golf course in Saskatchewan, two decades later the bucket list is complete.

In late May, the retired 60-year-old SaskTel employee used the Saskatoon Golf and Country Club’s “member for a day” promotion to play his 60th course and wrap up his provincial tour. Growing up in Carlyle, Lothian has always been an avid golfer, as his life progressed he stopped short of saying the sport has become an addiction, he simply says he’s passionate. The first “qualifying” course he said he played was Golf Kenosee, which makes sense being a youngster from the region. Lothian explained that he can’t recall the first course he played regarding this task, if he had teed off at a course prior to his idea to play the courses he didn’t make a point to revisit the club. Of all the courses he’s visited, he said one private club in Saskatoon stood out.

“Riverside Country Club,” he said to Golf Saskatchewan via email. “The entire course is so meticulously maintained and includes spectacular views along the South Saskatchewan River.”

Although he pointed to the Bridge City club as his favourite he said the province boasts several amazing facilities.

“There are many fantastic courses in Saskatchewan, Golf Kenosee, White Bear, the Evergreen in Nipawin, and Dakota Dunes all come to mind. My home course of Deer Valley has one of the most beautiful natural layouts in the province as well and the rebuilt 12th green is only days away from being in play,” Lothian said.

Many of the rounds he played alone, but in 1998 a group of his co-workers started an annual trip playing courses in Saskatchewan. The group of golf fanatics “christened” the event the “The Spackler,” named after Bill Murray’s famous character from Caddy Shack. The friends even got their own green jacket for the winner to proudly where. He said one trip took them to Blueberry Hill Golf Course near Livelong, SK. During the round a proud peacock strutted onto the course. One of the group quickly quipped, “I wonder what those taste like?”

“It’s a pet!” replied the course owner, much to the hilarity of the rest of their playing partners.

When asked about memorable shots or moments Lothian recounted a mid-week round at York Lake in Yorkton, which is now a 12-hole facility that wouldn’t make Lothian’s list today. He said he was close to that magical ace, but he was alone.

“I hit my tee ball solid and right at the flag, but then strangely as the ball was in mid-flight I had a brief anxiety attack as it occurred to me that as I was playing alone, what would I do if it went in?” he said. “The elevated heart rate was short lived as the ball rolled over the edge of the cup and about six feet right past.”

He did secure his first, and only hole-in-one on March 27, 2015 in Scottsdale, Arizona.

Aside from playing the many beautiful courses the province has to offer, Lothian said the people he’s met and just the roads leading far and wide across the province added to the value of his completed mission. He said many trips stand out for more than the golf.

“Perhaps most memorably was the trip on the July long weekend in 2014,” he recalled. “At this point I had four courses remaining to play, Riverside and Saskatoon Golf and Country Club, and two in the northwest, Meadow Lake Golf Club and Northern Meadows near Goodsoil. My wife (Val) and I drove up there for the singular purpose of playing these two golf courses. We stayed at a bed and breakfast in Pierceland that was spectacular in every way. One is very far north and west at this point in Saskatchewan, so we drove 50 mins to Cold Lake, Alberta for dinner one evening.”

Lothian’s passion for the game continues and he is now spreading his golf experiences across North America and across the ocean. He recently attended a practice round at Augusta National during the Masters, he’s going to take in an Open practice round at Royal Portrush and in July he’s “fulfilling a lifelong dream” of playing the Old Course at St. Andrews.