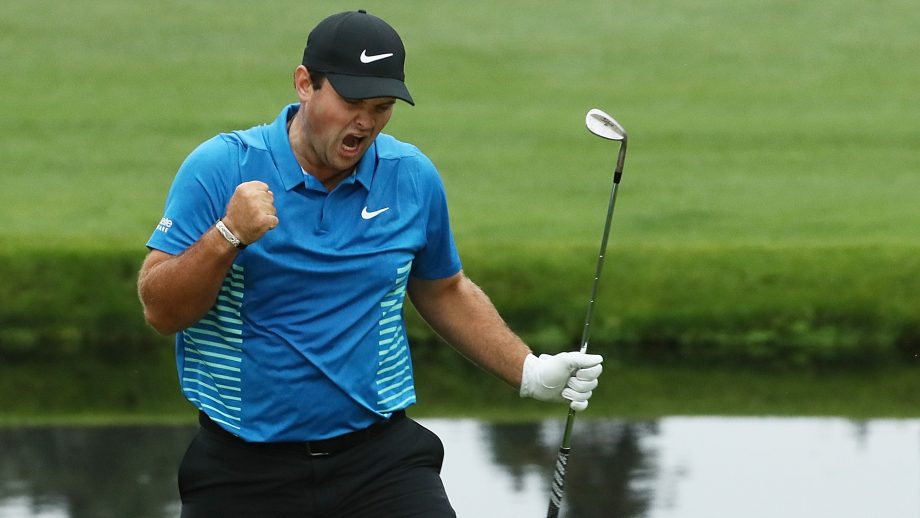 AUGUSTA, GA - APRIL 07: Patrick Reed of the United States reacts to an eagle on the 15th green during the third round of the 2018 Masters Tournament at Augusta National Golf Club on April 7, 2018 in Augusta, Georgia. (Photo by Jamie Squire/Getty Images)
Brian Lee

AUGUSTA, Ga. – Patrick Reed and Rory McIlroy meet again, this time for a green jacket instead of a gold Ryder Cup trophy.

Reed seized control of the Masters on a wet Saturday at Augusta National with a pair of eagles on the back nine and a 5-under 67 that gave him a three-shot lead. McIlroy, who chipped in for eagle on the front nine to briefly tie for the lead, made an 18-foot birdie on the final hole for a 65 to nudge a little closer.

This is not match play as it was for their singles match in Ryder Cup at Hazeltine.

And it sounded about as loud, too, especially with players taking advantage of greens slightly softened by the rain.

Reed ran off three straight birdies around the turn, and he stretched his lead to as many as five shots with his eagles.

He made a 15-foot eagle putt on the 13th, and then he showed he was not in the mood to play it safe on the 15th. From just under 270 yards, as the rain made the air heavy, Reed hit 3-wood just over the water and short of the bunker, and his chip from 80 feet slammed against the pin and dropped. Reed pumped his fist, the kind of emotion he typically saves for the Ryder Cup.

McIlroy can only hope he didn’t use up all his luck.

A chip that likely would have gone off the green at the par-5 eighth banged into the pin and dropped for eagle. He managed to find his second shot among the azaleas on the 13th to escape with par. And he got into the final group, an ideal position as he goes after the final leg of the career Grand Slam.

“There’s a lot more players in this tournament than just Patrick and I,” McIlroy said. “It won’t be quite as intense, but we’ll still be feeling it. Patrick is going for his first (major), and I’m going for … something else.”

He paused to smile when he heard a few chuckles. That “something else” is a collection of four majors that only five other players can claim.

On Sunday, golf will not be just a game. #themasters pic.twitter.com/2U8Tm3Uzgc

Rickie Fowler made eagle on the par-5 second and was 5 under through eight holes. He cooled until the end of his round, when a pair of birdies over the last two holes gave him a 65 and left him five shots behind. Jon Rahm of Spain also chipped in for eagle on No. 8 and saved par on the 13th after hitting into the creek in his round of 65. He was at 8-under 208.

Tiger Woods had to significantly lower his goal this week. He shot 72, was 18 shots behind and now hopes to finish the tournament under par.

So many others who started the third round with a chance didn’t do nearly enough to stay even remotely close to Reed. Justin Thomas (70), Jordan Spieth (71) and Dustin Johnson (71) all are at least nine shots behind. Adam Hadwin (72) of Abbotsford, B.C., was tied for 21st at even par.

Reed and McIlroy are linked so indelibly to that singles match at Hazeltine in 2016 when they produced the highest quality of golf amid ear-splitting cheers, making big putts on top of the other. Reed prevailed on the 18th hole in a rare U.S. victory at the Ryder Cup.

“All the pressure is on him,” McIlroy said. “He went to Augusta State. He’s got a lot of support here. I’m hoping to come in and spoil the party.”

McIlroy has plenty on him, too.

The Masters is where he threw away a four-shot lead in the final round, and now it’s the missing piece of a career slam.

“Hopefully, all I did learn seven years ago, I can put into practice,” McIlroy said. “I’ve been waiting for this chance.”

Reed doesn’t have a major. He doesn’t have experience of a big stage, a big crowd and enormous pressure. That came from Hazeltine and a match described as “one of the best we ever played.”

“The biggest thing I can pull from it is going head-to-head with Rory and I was able to put together a good round,” he said.

But he shrugged off any other comparisons, starting with the decorum outside the ropes at Augusta National compared with a flag-waving crowd at the Ryder Cup.

Reed also doesn’t buy into the idea that the pressure is all on him.

“I am leading,” he said. “At the same time, he’s going for the career Grand Slam.”