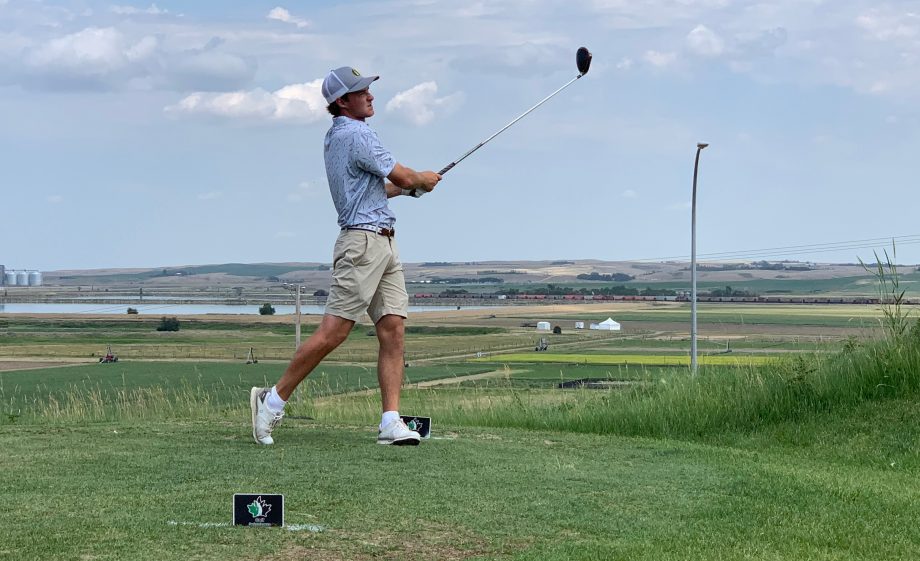 A round to remember for Saskatoon’s Roman Timmerman on Wednesday at the Men’s Amateur Championship.

Timmerman built a three-stroke lead during day one of the four-day event but his strong play in the first round was only a precursor to a tournament record score at Swift Current’s Elmwood Golf Club. The Riverside Country Club player notched seven birdies and a couple eagles leading to a 9-under, 63. Timmerman has ballooned his lead at the championship to seven shots over 2020 winner Ty Campbell. He said the golf course is playing into his hands.

“I feel like this course suits me well,” he said after the round. “Things are good, clicking right now. I feel like around here if you are hitting driver good you have a lot of wedges and I felt like my wedge game has been pretty good this week. Hopefully I can continue the next couple days.”

Lost in the excitement of Timmerman’s round was a pair off 66’s from Campbell and 2018 champion Kade Johnson. Campbell sits in second place at 9-under par, Johnson jumped 11 spots into fourth place at 5-under par. Danny Klughart sits in third at 6-under following a 2-under, 70 on Wednesday.

Four other players are tied for sixth at 2-under. The complete results can be found here.

The tournament will resume at 7:06 a.m. on Thursday. The final round will be played Friday.

Yorkton’s Ella Kozak is the new leader of the Saskatchewan Women’s Amateur Championship.

Kozak splashed in four birdies with the same number of bogeys to finish at even-par 72 during the second round of the 54-hole championship giving her a two-shot lead at 8-over par. Kozak leap frogged first round leader Alex Schmidt after the Regina golfer posted an 8-over, 80 during the middle round.

Reigning champion Brooklin Fry went five shots lower on day two to push herself into a tie for third with Autumn Neiszner. She shot 77 Wednesday falling back one place on the leaderboard.

Symone Ripley of Saskatoon and Regina’s Kim Walker sit tied for fourth at plus-19.

The final round goes Thursday in Swift Current beginning at 10:06 a.m.

The full women’s results can be seen here.

Danny Klughart is a round away from a third straight Saskatchewan Mid-Amateur Championship victory.

The Prince Albert resident shot 2-under, 70 on Wednesday which allowed the back-to-back champion to hold onto a two-stroke lead over Michael Smith of Saskatoon. Smith has posted consecutive rounds of 70 at the Elmwood Golf Club in Swift Current.

Scott Thompson (North Battleford) and Tyler Wright (Regina) sit in a tie for third place at 2-under par, four strokes behind Klughart.

Brett Henry rounds out the top five at even par.

The championship round will tee off on Thursday beginning at 7:06 a.m.