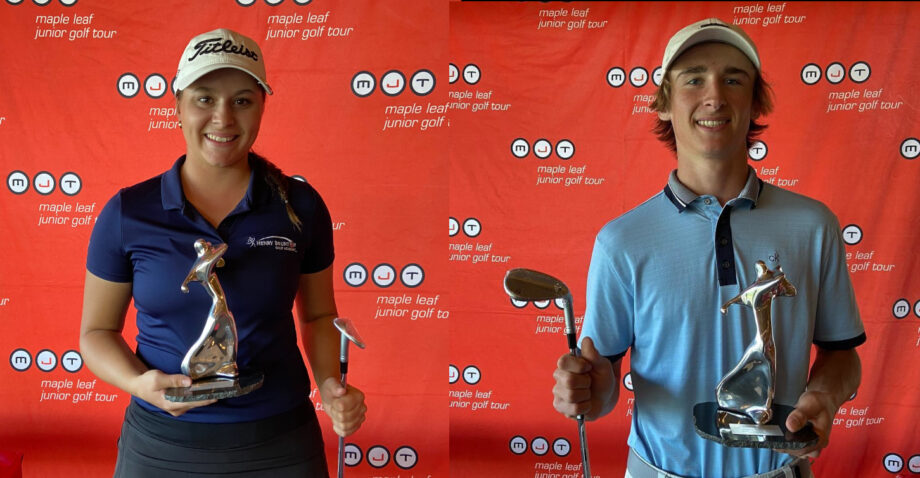 The Maple Leaf Junior Golf Tour (MJT) kicked off their 2022 Saskatchewan schedule with a 54-hole event at Swift Current’s Elmwood Golf Club on the May long weekend.

The MJT was supposed to begin their season in Saskatchewan earlier in May but due to the weather that event is pushed back leading the Elmwood tournament as the opener with a field of 106 players across six age groups.

Yorkton’s Ella Kozak started her season off strong with taking 15–19-year-old girl’s category with a three-round score of 218 (70, 74, 74) playing the course at just under 6,000 yards. Regina’s Hallie Crozier was was second shooting 247, Calgary golfer Gabrielle Roznicki was third with a score of 262.

On the boy’s side, in the peewee (under-13) age group Jayden Arnold of Calgary was the winner. The 11-year-old held off Saskatoon’s Lucas Sturgeon and Austin Nesbitt of Pilot Butte to take the victory. Arnold posted a score of 228 (78, 74, 76), Sturgeon was nine shots back in second, Nesbitt shot 243.

In the bantam (under-15) category another Alberta golfer came out on top. Taber’s Lyndon Kuryvial won in a playoff over Ryan Mosher of Saskatoon. Each finished the event at 235 through 54 holes but Kuryvial outlasted Mosher for the win. Jack Maharaj took the bronze medal, the Saskatoon product was just two strokes back.

In the juvenile (under-17) division Saskatoon’s Max Regier was a one-shot winner over Weyburn’s Darien Herlick. Regier carded rounds of 72, 73, and 74, just holding off Herlick in the group that evolved into a two-player race. Dane Giesbrecht was third at 235 (73, 84, 78).

In the under-19 junior boy’s age group Chase Pochylko, a winner at the MJT National event last October has another win.

The Saskatoon player shot back-to-back 71’s and a sparkling 68 in the final round to win the overall championship with a score of 210. Reigning provincial champion Hunter Kutcher was second at 217. Alex Swinnerton of Saskatoon was tied for third with Zachary Szakacs at 218.

The complete results of the event can be found here. The tournament was the first of five events that will be used to determine the Saskatchewan teams at the Canada Summer Games.

The next event is the NextGen Prairie Championship on June 10 – 12 in Ste. Anne, Manitoba. Golf Saskatchewan is taking a bus to the event, if you wish to register contact Steve Ryde at sryde@golfsk.org as soon as possible.