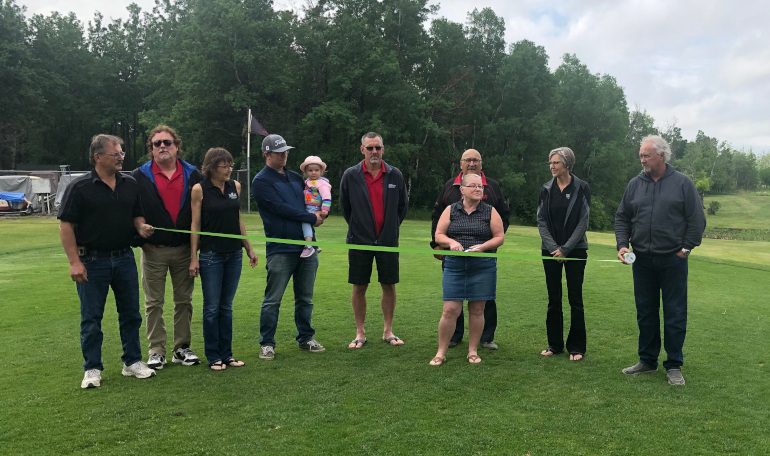 York Lake Golf and Country Club just outside Yorkton grew from a sand green, nine-hole course in the 1920’s to a full scale, picturesque 18-hole grass green track designed by coveted architect Les Furber but Mother Nature has since done some damage.

The course suffered severe flood carnage on two occasions in 2011 and 2014. With the back nine essentially destroyed by rain water the board of directors made a business decision to cut six holes and get to work.

“The floods destroyed pretty much everything,” Rick Schrader, the vice president of the board told GX94’s Benny Walchuk on Friday. “They tried to get the course back online but unfortunately we had another event in 2014 and it flooded again. If courses are set up to run as an 18-hole course and they go to a nine-hole course it’s like cutting your business in half.”

The board essentially decided to join Saskatoon’s Greenbryre as the second 12-hole facility in Saskatchewan. York Lake held a ribbon cutting ceremony on Friday to mark the occasion. Schrader said downsizing the course was the best route to take for financial stability.

“Being a business man all my career I look at cost over value, basically a 12-hole course time frame wise and cost wise is the most effective system in place right now for golf courses going forward. Time frame for people golfing and of course 33 per cent less grass to cut and 33 per cent less fertilizer and all those items,” Schrader said.

The weekend at York Lake is full of events to commemorate the redesign. On Saturday, the club is offering a special for golfers to try out the new 12 holes, you can golf the course for $12 per round. Schrader said there are many people to thank to the get the course where it needs to be.

“It was about two years of labour to get it all done and put it together. It worked out quite well, we had our own staff, we ran around, we did our own irrigation, everything was done by the guys working here and the volunteers. It was pretty decent,” Schrader explained,

The course is part of the York Lake Regional Park located just off Highway 10 near Yorkton. The club originated in 1926.