RBC Scramble a “trip of a lifetime” 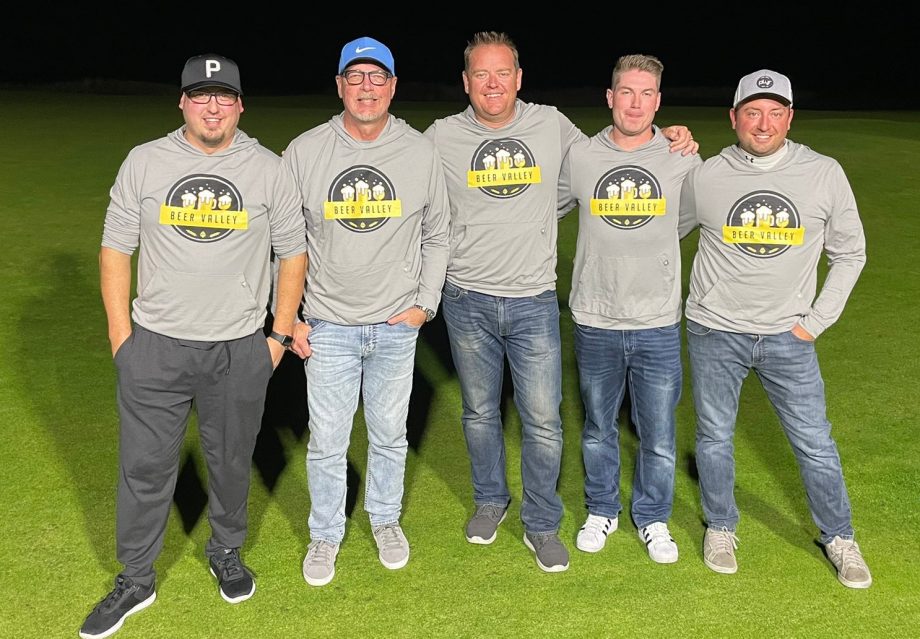 The team from Deer Valley Golf Resort is still basking in the moment of a trip to the RBC Scramble National Championship at Cabot in Cape Breton, N.S.

The team of Travis Fifi, Curtis Addison, Ward Komonosky, Chris Campbell, and John Greenough won the local qualifier at Deer Valley before narrowly escaping the regional event at Wascana Country Club. Greenough said following the National Championship the team looked back on a crazy road just to get to Cabot.

“Every little thing along the journey, like what could have happened. If we don’t make a 60-foot putt on hole 17 at Wascana we’re not at Cabot. Everything fell in place, we were low team at Wascana by 0.9 stokes, one stroke one way or another and we’re not the qualifying team. They took one team from the Saskatchewan zone, they (PGA of Canada) flew us out there and gave us the trip of a lifetime,” Greenough explained.

The 54-hole event started at Cabot Links before shifting to Cabot Cliffs for the middle of the three rounds. Greenough said they started well on day one before some struggles on day two but just playing the highly touted courses for the first time was incredible.

“On day two we played Cabot Cliffs, fantastic golf course, I didn’t realize the Cliffs was ranked higher than the Links, I just knew they were both awesome. I was like oh, we get to play an even better golf course tomorrow. Alright I’m in,” he laughed. “We struggled there but it was a very challenging day. The scores were up, it’s a tougher course, we were out there for a while, by the time we got to 16, 17, 18, the three holes you want to enjoy, it felt like it was -2 degrees and blowing about 70 kilometers an hour. It was interesting playing those holes, starting tee balls over the ocean, and letting the wind bring it back, we’ve seen Saskatchewan wind, but this was new to me.”

Overall, the team ended the championship with a sixth-place finish. Greenough said from an early upgrade of the accommodations for the amateurs to the host facility the championship was one he will remember for a long time.

“I have played in national championships before and it felt like a national championship,” he added. “it’s obviously different as it’s a scramble and tunes are playing on the first tee, there is a more social aspect, but it truly felt like a national event. The golf course was first class the whole way, all the amenities were there, PGA of Canada ran an absolutely fabulous event.”

Fifi echoed the sentiments of team pro Greenough of the trip. He said the road to get to Cabot was longer for him. He attempted to get to the championship through the Avonlea qualifier as well as the tournament in Warman at the Legends. The team eventually got to the Wascana with a 0.1 stroke win at the Deer Valley qualifier. He said many things could have changed their fate.

“On hole 18 at the Wascana, our guy was going to hit five-iron, we said man this is the most wide-open hole in Saskatchewan, go driver. He put it onto 10, we hit it, we make par and win by 0.9. Between the two qualifiers we win by one shot,” he said.

Along with the mentioned upgrades in rooms the team also received signed Corey Connors flags, a video message from Connors wishing the team luck plus some wine for the trip. Fifi said those perks were fantastic and they hadn’t played the courses yet. The team also played a night round at a 10-hole, par-3 facility at Cabot. Fifi also entered a par-three contest with TSN’s Bob Weekes on hand for introductions. He said potentially returning next year with the group would be great.

“I would think so if we are allowed to,” he added. “I don’t think we will do other qualifiers. The pro from the course you qualify at goes with you. Johnny is a great golfer and guy, all day we want him with us.”

Fifi is a veteran among the amateur circuit in Saskatchewan and has attended several Golf Canada Canadian Championships in his career. He said those events are great to attend but the trip to Cabot provided a different experience overall.

“The course is not close, both of them, they are by far the best. I played the Victoria Golf Club for the mid-am and it was amazing, that was my favourite course until I played Cabot. This course is just, unbeatable. It’s not even close to as stressful as playing your own ball, you have four other guys to depend on. You can go to the halfway shack and grab a beer, it’s just a different type of fun,” Fifi concluded.