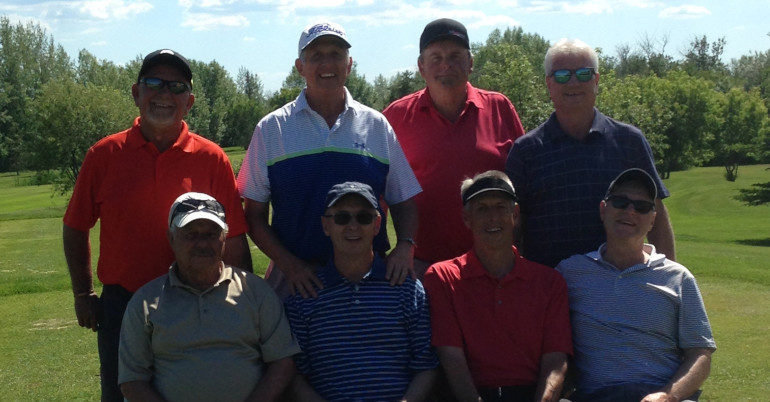 Jake Stolar (back-left) is nearing the 100 course mark in Saskatchewan.

It’s a feat that has likely been accomplished by several people in Saskatchewan, or maybe teeing off at 100 different courses in the province is a rarity but, Melville’s Jake Stolar is getting close.

A member at the Melville Regional Park Golf Course for 45 years, the former railway employee has used his travel time to his advantage over the years playing 87 different clubs in Saskatchewan heading into this season. As Stolar nears the century mark, he said reaching the milestone wasn’t a set goal.

“I don’t think I ever had the plan that I was going to play 100 golf courses,” Stolar told Golf Saskatchewan earlier this summer.

Along with being a member in Melville for nearly half a century he also operated the proshop for seven seasons. Stolar said bug to visit other courses picked up at that point.

Stolar said he routinely visits over 20 different courses a year, that includes trips with golf buddies outside the provincial borders. He had recently returned from a four-day trip to Alberta when the interview was conducted. When he was working on the rail lines his work took him to Watrous and the Biggar area consistently so he’s familiar with the clubs in those small communities. As the years have passed and Stolar is retired there is plenty to keep him going back to the course, and the Saskatchewan highways.

“Probably the cold beer,” he laughed. “I enjoy the comradery, the friends you make over many years and the challenge of new courses. If I had to play the same nine-hole course day after day I’d quit. I like the different courses; I’ve never played a bad one yet. To quote Arnold Palmer, my favourite one is the one I’m playing this afternoon.”

He does have some courses that do stand out among his travels. Several nine-hole courses are near the top of his list.

“Katepwa is very nice, beautiful conditions all the time,” Stolar boasted. Kelvington is another favourite, my son-in-law is a member there. Another beautiful nine-holer is Willowbunch. It’s very nice and one more is The Creek at LeRoy. LeRoy is really nice; I like it and have taken friends there and they’ve enjoyed it.”

When it comes to 18-hole favourites, Stolar spreads his thoughts from one end of the province to the other.

“I feel Golf Kenosee and Whitebear is the best one-two punch in Saskatchewan for playing two good quality golf courses,” he said. “Whitebear is a little harder for the average Joe. I also favour the northern courses, I really like North Battleford, I like the Cooke in Prince Albert, the Evergreen in Nipawin is one of everyone’s favourites. I like Dakota Dunes and a new find for me last year was Northern Meadows at Goodsoil, a really special place.”

Honourable mentions for Stolar are close to his home in the Parkland region that include Deer Park in Yorkton, Good Spirit Lake Golf Course, and Madge Lake in the Qu’Appelle Valley. Despite travelling to many “hidden gems” and top-notch facilities and being on the regional park board for over two decades, Stolar would be remised if he didn’t plug his home course in Melville.

“It’s a hard golf course,” he explained. “The people we get here, they may play it once, especially mediocre golfers. They will lose six or eight balls and say screw it, I’m not going back there, I shot 105 and lost eight balls. Then the next guy likes it because it’s a very challenging course. The reason we don’t get the traffic it’s a very difficult course but on the other side it’s a great place to learn how to play because I can go to any golf course in the world and handle what it throws at you.”

Stolar had plans to head south again this season and knock at least three more courses of the list, those being Moose Creek at Oxbow, Carnduff, and Carlyle. That would put his total over 90.

He expects to surpass the 100 mark sometime next summer.