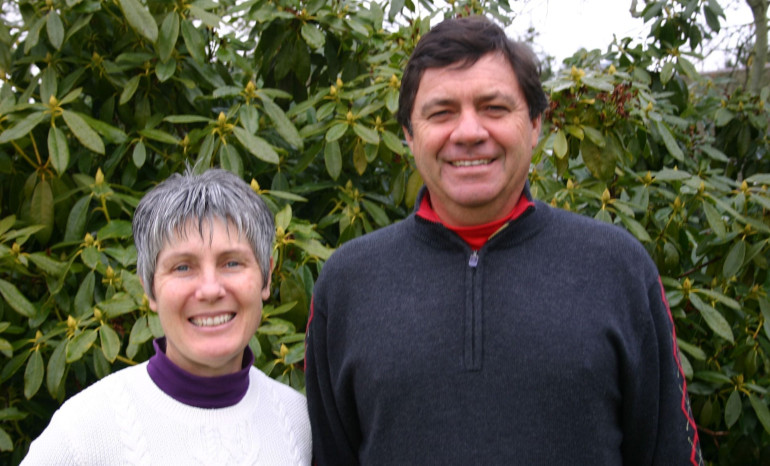 Patty and Phillip Jonas have brought their golf academy to Saskatoon.

Golfers in Saskatchewan have a couple new options if anyone is looking for lessons or golf programs.

PGA of Canada members Patty and Phillip Jonas have relocated from Vancouver and settled in Saskatoon where they will both teach out of the Saskatoon Golf and Country Club (SGCC). The couple opened an academy in British Columbia 17 years ago but family connections to Saskatchewan has drawn them to the province. Originally from Prince George, Patty’s brother called Saskatchewan home while a member of the RCMP. Her parents made their way here and since July she also found a new home in the Bridge City. Combining the family closeness she said the need for golf teachers made the move a win-win.

Patty is a two-time amateur B.C. women’s champion, a three-time PGA of B.C. women’s champion, a former number one ranked Canadian women and was inducted into the B.C. Golf Hall of Fame alongside Phillip last year. Following her successful playing career that included a stint on the European LPGA and the now Symetra Tour she knew immediately teaching was her passion in the game.

Phillip’s road to teaching is different from his wife of over 30 years. Born in South Africa, Phillip’s father was a course manager, so golf has been his passion his entire life. He won the IMG Academy Junior World Championships twice in the five years he travelled to San Diego for the tournament. He is a three-time South Africa junior champion. Following his junior career in his homeland Phillip attended Lamar University in Beaumont, Texas. It was there he met Patty. Phillip went on to a 17-year professional career across several tours and won five times. He admitted he had a harder time giving up playing the game to teach but it’s grown on him.

“I really enjoy teaching seniors, my dad played until he was 93 but he was having lessons when he was 89. It kept him young. Whether he was going to get better or not, I don’t know, but he went to bed thinking man, tomorrow I’m going to hit it further. If I can do the same and help people play better golf, great, but also have a better life,” Phillip said.

Phillip spent a couple seasons on the European Senior Tour and has played in fields with 30 different major champions. His golf credentials continued to expand in British Columbia. He was named PGA of B.C. player of the year four times, the teacher of the year in 2012 and has won over 100 local professional tournaments.

While Patty was in Saskatchewan in July of this year Phillip stayed in B.C. to finish the summer with their clients there. He did visit the SGCC during the season and was very impressed with what he saw.

“I haven’t seen a better practice facility anywhere in the world,” he claimed. “I like the golf course but it’s more the atmosphere of the place. In those two weeks I knew that. The guys in the proshop have great attitudes and energy. The range always has kids on it. I liked that.”

The couple joked that Patty has wanted to relocate to Saskatchewan for about 25 years. Being from northern B.C. long winters weren’t a downside. Phillip on the other hand was harder to convince. Patty has been seeking potential opportunities for the pair for some time. The couple is friends with The Legends Golf Course professional Davidson Matyczuk as well as fellow South African Wayne Fairbairn formally of the Willows. In speaking with SGCC general manager McLaren Taylor after the hiring of professional Brennan Gee he said there is still an opportunity at the club.

“We had wanted to move here but we weren’t going to move unless there was an opportunity. The jobs that come about here are very few. I’ve kept an eye over the years and there’s just not a lot of opportunities. We went a different route and I said, here’s what we would like to do. McLaren thought about it said yeah, we think this could work,” Patty said.

Patty did do some lessons and programming over the summer but spent most of the uncertain season getting to know the membership and community within the club. Now that the Jonas’ are settled in a new home they feel 2021 will be officially year one.

“We certainly hope to have people look at this place for lessons and the majority of the membership want to take lessons from people that are here. Not just us but Brennen and Sloane (Harder). I have done a lot of ‘learn to golf’ classes in Vancouver and so wanting to get people outside the membership learning to play and then they get a membership,” she added.

The couple is setting up potential lessons in the GolfDome for the winter and hopefully one day visitors will be allowed into senior care homes again, Patty said she’d love to take golf to seniors to assist in their activities.

For more information on the Jonas’ you can visit their website here.