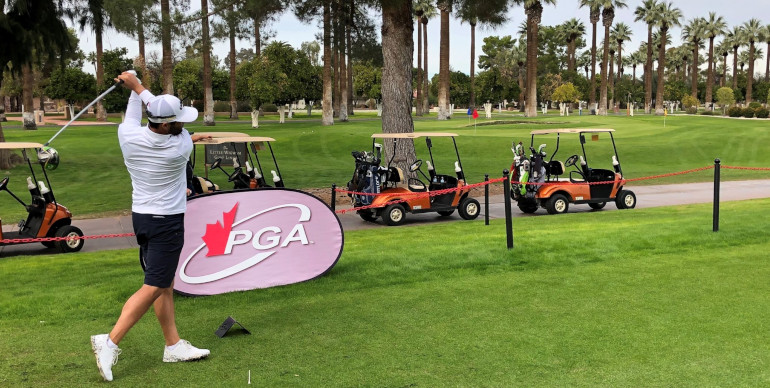 Adam Hadwin was on hand for the opening of the PGA Head Pro Championship Monday. Photo-PGA of Canada/Twitter

The 54-hole stroke play championship opens Tuesday with the players chasing a $55,000 prize purse for the next few days. Moose Jaw born Adam Hadwin, a rising star on the PGA Tour was on hand for the practice round on Monday.

Saskatchewan has four players in the field of 90 players. Brennan Rumancik, Jeff Chambers, Kevin Dietz, and John Greenough. Former Regina resident and four-time Saskatchewan amateur champion Lindsay Bernakevitch is also in the field. Rumancik tees off at 11:33 a.m., Chambers is in the 11:42 a.m. group, Dietz will begin at 11:51 a.m., and Greenough starts at noon.

Aside from the individual championship, the event features a two-day Interzone competition. The club’s represented in that portion of the tournament are the Elmwood Golf Club (Chambers, Rumancik), Tor Hill Golf Course (Dietz) and Deer Valley Golf & Estates (Greenough).