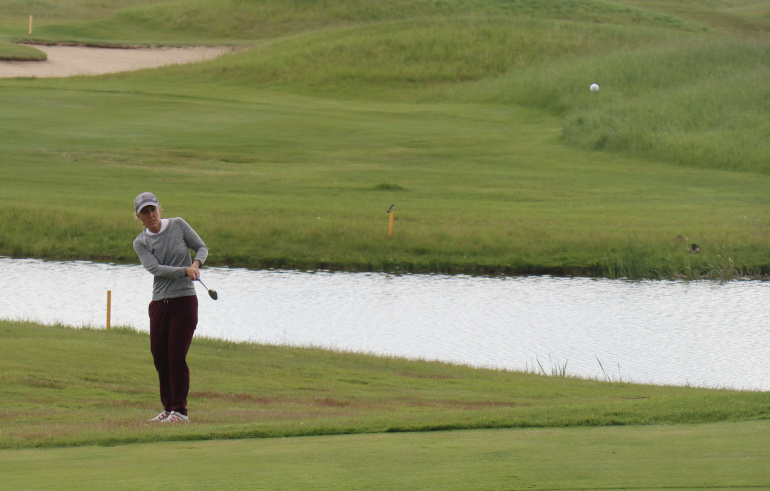 Saskatoon's Carla Odnokon is the day one leader of the provincial women's amateur championship.

The defending Saskatchewan women’s amateur champion has the first-round lead at the 2019 tournament.

Saskatoon’s Carla Odnokon shot one-over, 73 Wednesday at Moon Lake Golf and Country Club giving the 2018 champion a three-stroke lead over Kathy Ziglo. Odnokon told Global Saskatoon after the round that her day was consistent.

“I played well today, hit the ball well. I just took the way I was playing with my short game and the score came out good,” Odnokon said.

The Saskatoon Golf and Country Club player kept her card quite tidy over 18 holes, a double bogey on the second hole was corrected with a birdie on hole three. She hit another bogey on nine before posting eight pars on the back nine and a birdie on 15. She said being the defending champion doesn’t add any pressure.

“I don’t feel like that; I just need to focus on my own game and see what happens at the end. I can’t focus on that, it’s up to me,” she said.

Three other golfers are within seven shots of Odnokon, another two are single digit shots back. With 36 holes to play, Odnokon said there is still plenty of golf left.

“I just need to keep it steady, relax, and play the game that Moon Lake allows us to play,” she concluded.

Ziglo, the winner of the Saskatoon Women’s Amateur Championship earlier this season sits in second place at four-over par. Ziglo had a couple bogeys on the front nine and a double on hole 12 before dropping two birdies in the final four holes. She also said her round was steady on day one.

“I was pretty consistent today,” she said to Global Saskatoon and CTV Saskatoon. “The weather was really good for Moon Lake; the wind tends to really blow out here. It was a good day, I hit the ball well. I hit a lot of greens, had a couple mistakes around the greens but overall it was pretty good,” she said.

The wind did tend to pickup as the day moved along. Ziglo says she plays well in a strong breeze and hopes that becomes a factor moving forward on Thursday and Friday.

“I like the course, I played here in a tournament this past weekend and I played pretty good. I was feeling pretty good but like I said it’s the wind. I like the wind, but we didn’t get it today, I hope it blows the rest of the week,” she said.

Reigning junior girl’s champion Brooklin Fry sits in third place. The Shell Lake golfer was eight-over par after nine holes but shot one-under on the back nine to get back in the hunt. Yorkton’s Ella Kozak sits in fourth place at eight-over, Kim Brown of Saskatoon rounds out the top five at plus-nine.

The complete leaderboard can be seen here.

Round two of the three day championship begins at 8 a.m.