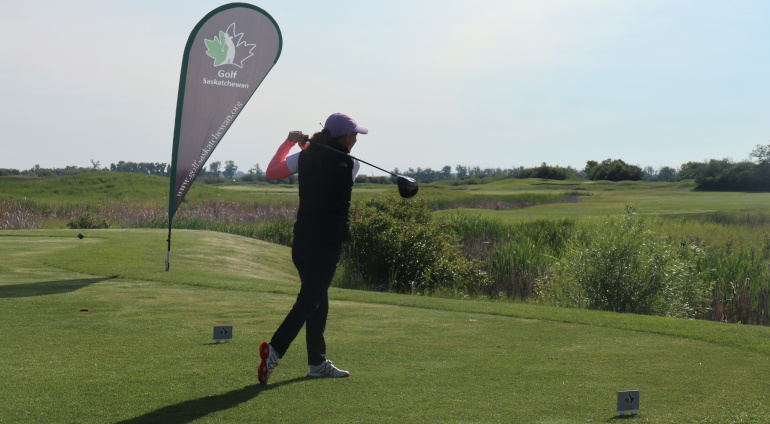 Saskatoon's Carla Odnokon will take a four shot lead into the final of the women's amateur championship.

Despite shooting seven shots higher during round two at the Saskatchewan Women’s Amateur Championship Carla Odnokon has increased her lead atop the leaderboard.

“Today was a bit more of a struggle in comparison to yesterday,” she said to Global Saskatoon after the round. “I didn’t strike the ball as well or putt is as well as yesterday and I have some things to work on for tomorrow, but it was fine.”

Coming off a one-over par, 73 during Wednesday’s opening round Odnokon carded eight bogeys and one birdie during round two. She will take the lead into the championship round Friday looking for her second consecutive amateur win. Odnokon said focusing on her own game will be the game plan for the final 18 holes.

“I really am going to focus on what I want to do. I left a lot of strokes out there, so the improvement comes directly from me tomorrow,” she said.

Ziglo remains in second position despite shooting an eight-over par, 80. The Saskatoon Golf and Country club member was four-over par after the first day. She said her second round produced up-and-down moments.

“I hit the ball okay at moments and really poorly in others,” she said. “The putter left me on the back nine, so I have to clean some stuff up for tomorrow.”

Brooklin Fry and Kim Brown were the only players in the 14-person field to improve on their first-round performance. Fry, 14, has gotten herself into third place at plus-14 with a round of 79 Thursday. The 2018 junior girl’s champion said she played well for most of her round.

“My round was pretty good off the start, I was one-over after nine and it got a little rough at the start of the back, but I cleaned it up at the end,” Fry said.

With a chance to make the amateur national team, Fry said her goal wasn’t to finish in the top-three coming into the event but said making the roster would be a great feeling.

“It is definitely not something I was expecting coming into this,” she said. “It would be really awesome to make it. I was trying to get in to the top three, so this is right where I want to be.”

Brown sits in fourth place overall at 15-over par. Ella Kozak rounds out the top-five. The complete leaderboard can be seen here.

The third, and final round tees off at 8 a.m. on Friday.