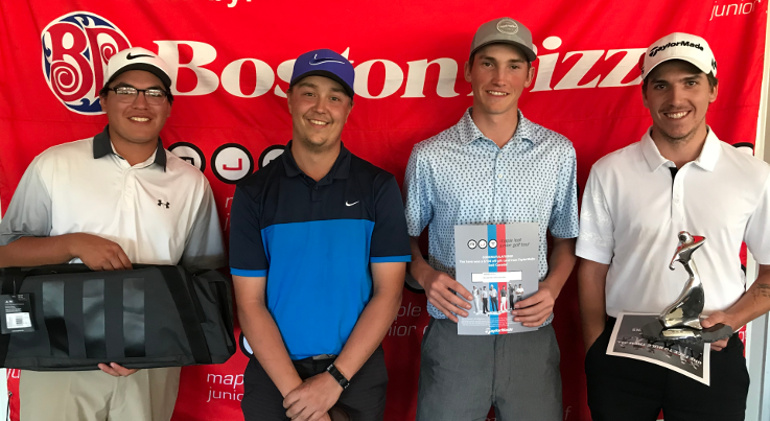 Obrigewitsch, 19, said he played plenty of team sports growing up but loves the individualism of the game and the mannerisms that come with it.

“I like meeting people, the respect you get from people,” he said. “The golf community in general is so nice and everyone is so respectful.”

Obrigewitsch took part in his first Maple Leaf Junior Tour (MJT) event at Deer Valley when he was 11-years-old. At the age of 13 he started competing in more events and became more serious about the sport. This past summer he played in several MJT tournaments and a Future Links event. Obrigewitsch captured the Regina City Junior championship as well. He said 2018 was his most successful season yet.

“I think this year was my best year. I won my first event in Portage la Prairie at the start of the year. I played the Future Links a month after that, I had a good first two rounds but my last round I kind of blew up, but yeah this was definitely my best year,” Obrigewitsch said.

He was also the bronze medal winner at the Golf Saskatchewan Junior Boy’s Championship. Obrigewitsch fought back in tough conditions during round three at Moon Lake Golf and Country Club shooting a 72 to claim a spot on Team Saskatchewan and a trip to Medicine Hat for the national championship. He said the experience was fantastic to take in.

“I’ve never played in that kind of atmosphere before, it was intimidating,” he said. “There was a lot of very good players there, I didn’t perform my greatest. Overall it was a lot of fun and a great learning experience for me.”

Obrigewitsch missed the cut at the Canadian Championship, thinking that was his final junior tournament he wasn’t satisfied. The MJT invited him to participate in the collegiate age group at their National Championship in Phoenix, Arizona over the past weekend. He accumulated enough points on the tour to receive an invite and said bringing home a silver meant was special to him.

“The nationals in Medicine Hat would have been my last one and I didn’t want to end my junior career with that one because I played so bad. I was glad I got another opportunity to play another junior tournament. I am happy with how I finished in Phoenix in my last junior tournament ever,” he said.

You can hear more from Obrigewitsch who spoke with Golf Saskatchewan’s Clark Stork Tuesday.