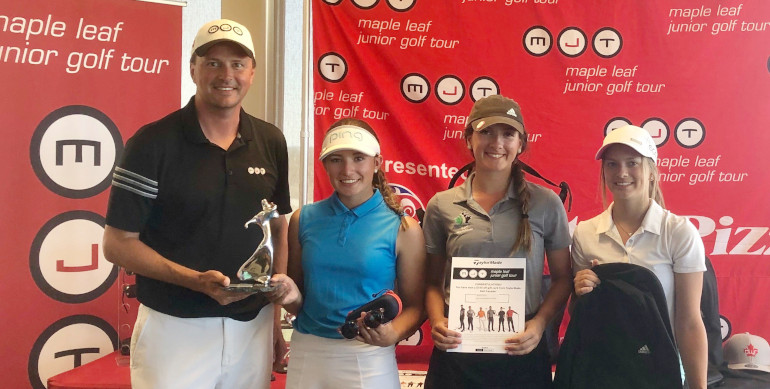 Autumn Neiszner (second, left) was the low girl at this week's MJT event.

The Maple Leaf Junior Golf Tour (MJT) made a stop at the Dakota Dunes Golf Links just outside Saskatoon this week with over 70 golfers playing in the event.

Regina’s Autumn Neiszner continues her impressive season with another victory. The 15-year-old Wascana Country Club member is coming off a provincial junior women’s win and followed it up with a two-round total of 159 (81, 78) to hold off Saskatoon’s Sarah Grieve. Grieve, 16, was three shots back after carding rounds of 83 and 79. Sophie Pasitney of St. Paul Alta. placed third with a score of 180 (91, 89).

Braden O’Grady of Edmonton was the low overall boy in the field. He shot 68 in round one and 69 during the final round on Tuesday. His 137 was two strokes lower than Kindersley’s Cort Tunall’s 139 (72, 67) to win the juvenile boy’s division. Cole Bergheim of Red Deer finished third with a total of 140. Jayden Dudas of Estevan placed fourth at 145, Wawota golfer Theoren West rounded out the top-five at 148.

In the junior boy’s division, that played the same 6,310 yards as the juvenile’s was won by Saskatoon’S Josh Nagy. The Riverside Country Club member shot 71 and 69 to finish at 140 and win by seven strokes over Prince Albert’s Cole Jenkins. Colby Friedrich of Battleford carded rounds of 74 and 76 to finish in the top-three. Kyler Cote of Kindersley posted a two-round total of 154 to finish in fourth place, Regina’s Adam Husli recorded a top-five finish with a total of 156.

Bradin Stahl of Priddis, Alta. claimed the bantam boy’s category with a score of 143 (68, 75). Saskatoon’s Tommy Danielson, fresh off his solid performance at the Men’s Amateur Championship last week placed second with a total of 149 (69, 80). Colin Pasitney of St. Paul, Alta. finished third at 152, Darien Herlick out of the Weyburn Golf Club and Estevan’s Ryan Chernoff tied for fourth with scores of 156.

The peewee boy’s division was also won by an Alberta golfer, Brett Jones of Calgary shot 71 and 76 to hold off Warman’s Dane Giesbrecht by nine strokes to win the event. Peyton Stahl, a Priddis, Alta. product placed third with a score of 159. La Ronge golfer Dade Bernatchez was fourth at 163 (81, 82).

Another 21 golfers were involved in the event playing a one-day event known as the MJT Mini-Tour. All the golfers are 12 or younger.

Saskatoon’s Poppy Hudye Baranesky won the 9 – 10-year-old girl’s category with a score of 107.

Keaton Kreklewich of Melville was the winner in the under-8 boy’s division with a round of 77.

In the boy’s 9 – 10 age group it was Saskatoon’s Lucas Sturgean coming out victorious with a score of 83.

You can find all the Mini-Tour results here.

There is one more MJT event in Saskatchewan this season, that will be the MJT/Golf Saskatchewan OOM Championship at the Legends Golf Course in Warman on Aug. 24 and 25.