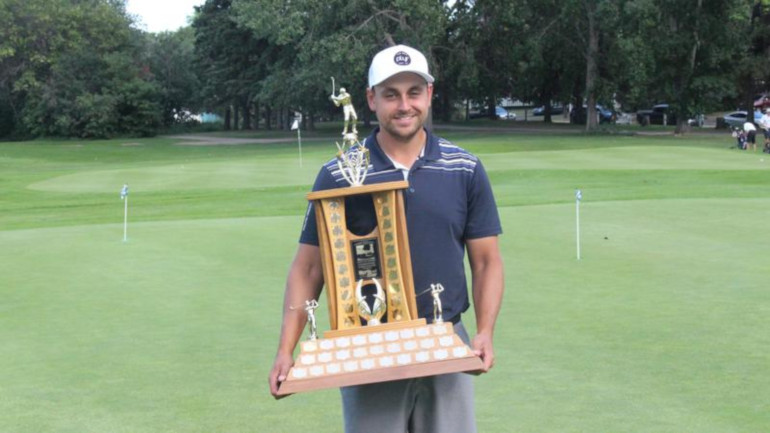 After an intense final round of match play between Klughart and Greg Swenson that went 18-holes Klughart came out victorious.

The three-day tournament featured 104 players and it all came down to the final round between the two that teed off at 1:30 p.m. on Monday

“I played pretty well,” Klughart told paNOW. “I putted pretty well this week. The qualifying round I didn’t get off to the best of starts, I wasn’t hitting the ball overly well.

“Once we got into the match play I played pretty good the whole time. I mean it was a lot more difficult out there this afternoon once the wind picked up so it made it a lot more challenging,” he added.

Klughart said even though it was a tight match it’s not hard for him to keep calm and stay in the moment.

“I’ve been in that situation a lot even just last weekend I was in that position I unfortunately let that one slip away last Friday but I find it pretty easy to control my emotions,” Klughart explained. Last week he won the Mid-Am in Warman but just failed to clinch the Men’s Amateur title by one stroke.

Klughart added he and Swenson have played this tournament quite a few times but neither have won it all until today.

“And this is the last Cooke tourney I haven’t won so it’s good, got them all now.”

Even though it wasn’t the result he hoped for Swenson was happy with his game all weekend.

“Everyone knew how well Danny’s been playing over the past two years. He’s definitely the top player in the province right now, so I was happy I got my shot at him,” Swenson said. “In the end I came up a little short but I’m just happy the match went to 18 and it was lots of fun.”

He added he and Klughart have been friends for quite a few years and they’ve always wanted to play each other in tournament action.

“This is the first time we got to play, and it was very special it got to be in the final. I mean we were both playing for our first Northern win and I’m happy for the kid he played well.”

As the two went through the full 18 holes Monday afternoon numerous people followed along in golf carts to watch them faceoff for the ultimate prize.

“It seemed like there was 100 people out there and I think we both kind of had our little moments where we felt the pressure but in the end we both played pretty solid and it was a lot of fun,” Swenson said.