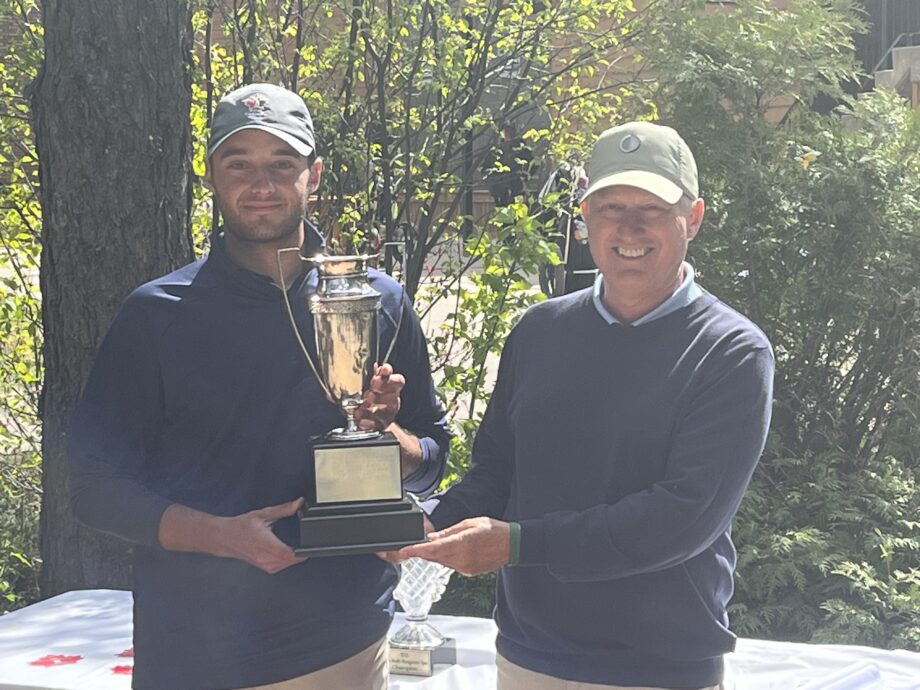 The two-time Saskatchewan junior champion shot 71 and 73 on the weekend, his even score was a stroke better than Ty Campbell, Alex Swinnerton, Kade Johnson, and Kevin Dietz. Nagy said adding the highly coveted win to his resume felt great.

“This is kind of my first amateur win, I haven’t won anything since junior,” he said after the trophy presentation. “It feels great, the field was really tough, I’m just excited.”

The Scotia Wealth Open is an event that allows professionals and amateurs to compete for the same championship. Nagy said holding off the top players across the province was rewarding.

“Not just the amateurs like Roman and everyone like that but throw in Ty and Kade who are now pro Phil Jonas, Kevin Dietz, everyone like that, it’s definitely a little tougher than we get at the Amateur Championship, so it feels great right now,” Nagy said.

The winner of the tournament was awarded a sponsor exemption into the upcoming Elk Ridge Open. Nagy is already in the PGA Tour Canada event for the second year. The Scotia Wealth Open organizing committee decided on a playoff involving the four players tied for second, Campbell birdied hole 18 to secure his spot in the Open.

Saskatoon’s Kathy Ziglo won the Ladies Northern in Prince Albert for the seventh time and first since 2014.

Ziglo fought back from a three-shot deficit behind Sarah Grieve on day two to claim the trophy and start off the 2022 Women’s Order of Merit (OMT) with a win. She shot 82 in round one Saturday why Grieve posted a 79, Ziglo carded another 82 while Grieve shot 86 allowing the veteran a one-shot win.

Creighton’s Lauren Fox and Saskatoon’s Carrie Verishagen tied for third at 167. Fox shot 82 and 85, Verishagen shot 86 in round one and came back with an 81 on day two to climb the leaderboard.

Saskatoon’s Dianne Bethune was the senior champion with a score of 167 (83, 84), just three strokes back of the overall championship.