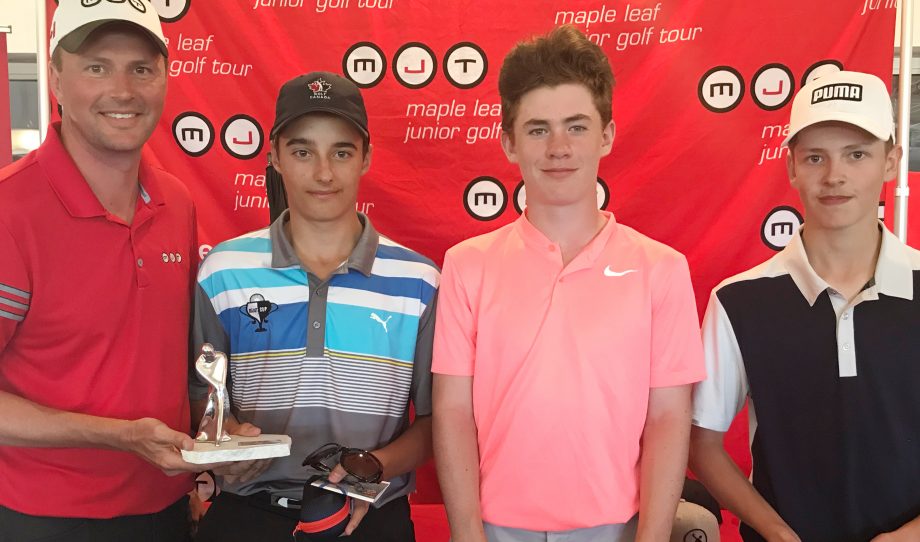 Saskatoon's Josh Nagy (second from left) was the overall low scorer at the Maple Leaf Junior Tour event in Lloydminster on June 2 and 3.

Josh Nagy is already a two-time winner on the Maple Leaf Junior Tour (MJT) this season following a two-round score of 152 this past weekend at the Lloydminster Golf and Curling Centre.

The 16-year-old Saskatoon product fired back-to-back 76’s to take the juvenile boy’s division by six strokes over Edmonton’s Nicholas Rimmer. Estevan’s Chase Gedak shot 163 over the 36 holes to finish in third place. 25 golfers competed in the category, 19 hailing from Saskatchewan.

Will Blake, 14, of Regina was the winner in the bantam boy’s division, the Regina golfer shot 81 and 77 for a one-stroke margin over Jace Shannon of Forestburg, Alta. La Ronge athlete Parker Layton placed third just a pair of strokes behind the leader. 20 players competed in the bantam age group.

In the junior boy’s division, Estevan Woodlawn member Logan Chernoff was victorious shooting 157 over the two days. He edged Swift Current’s Griffin Wilson by a stroke. Kindersley product Brody Istace was third with a score of 159. A dozen golfers competed in the junior boy’s category.

Jordan Unger, 19, of Saskatoon took top spot in the collegiate category, he shot 86 on Saturday and followed that with an 82 on Sunday for a four-stroke win over Lloydminster’s Jason Kim. Martensville’s Jax Gipman placed third with a 176.

In the peewee boy’s group, Edmonton athlete Tate Brugggeman picked up a nine-stroke win over Weyburn’s Darien Herlick. Solomon Ness from Saskatoon was third place with a 196.

On the girl’s side there were a pair of categories with competitors, in the U15 age group Brooklin Fry was the low score shooting 189. In the 15-18 division, Alyshia Suleman of Sherwood Park, Alta. won by six strokes over Saskatoon’s Sarah Grieve.

The next MJT event in Saskatchewan is June 16 and 17 in North Battleford.