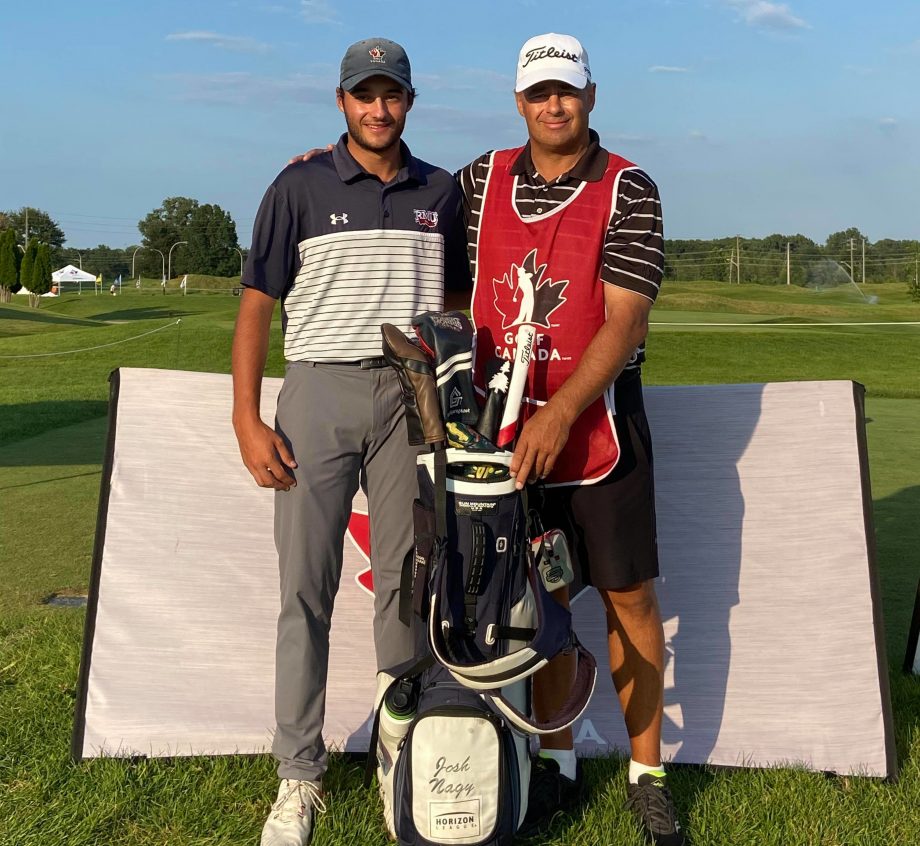 Josh Nagy had his dad Troy on the bag at nationals in Windsor last week.
Clark Stork

The six players from Saskatchewan that competed in the Canadian Amateur Men’s Championship last week in Windsor are back and reflecting on the week that was.

For Saskatoon’s Josh Nagy, his finish in a tie for 59th is monumental as the two-time Saskatchewan junior champion made his first cut at a national event in his fourth try. Nagy said he rebounded nicely from a couple big numbers during round one to stick around for all 72 holes.

“I was hitting the ball a lot better than the scores,” he told Golf Saskatchewan on Monday. “I mixed in two triples in the first round so I knew what I had to do during the second round. It was nice to be able to go out and do it and finish 1-under over the last three. It was good to feel a different type of pressure.”

Nagy opened the championship with a round of 77 before bouncing back with a 70 on day two. He wrapped up the event shooting 76, 69 for a four-round total of 8-over, 292.

“It was good to get a couple rounds under par, those under par rounds I struck it really nice. It was just good to see the game move along in the right direction and see some decent scores,” Nagy added.

As mentioned, Nagy missed the cut at two previous junior national championships and the one amateur he took part in. He said there is a mental approach you need when playing an event of this nature.

“It’s definitely a lot different, there is a big relief once you made it. It’s different in the aspect that you must go out on in the third and fourth rounds and regain your focus. Now you are playing to win but that was the mentality you have to have otherwise shots can slip away from you,” he said.

Nagy will play one more competitive event in North Battleford this summer before he heads back down to Robert Morris University for his junior season later in August.

For Yorkton’s Kade Johnson, he’s looking back on another strong performance at nationals placing tied for 17th at the Ambassador Golf Club in Windsor.

Johnson said he was happy with his performance as well as the other five Saskatchewan representatives.

“I was a great week, it was an enjoyable week,” he said. “We had a good crew of us, six of us that went out which is a little smaller than normal, but it was awesome. All of us played really well, five of the six of us made the cut and then Chase (Pochylko) missing it by one, only being 17 and his first am, that’s really impressive playing. I was very happy with it, it was a great field this year and I felt like I contended well.”

The Deer Park member opened the tournament with a 74 before going low in the second round with a 66 to secure his participation in the final two rounds. Johnson shot 72 in round three before shooting the lights out again in round four with a 65. He said the week was a little bit of a rollercoaster score wise.

“It’s one of the courses where my game wasn’t too much different over four days,” Johnson explained. “It’s one of those courses set up for nationals, really thick rough, fairways rolling quick so it’s tough to keep it on the edge of the fairway, it tends to roll into the rough. Once it rolls into the rough you have to play conservative to the middle of the greens, you can’t really be aggressive. The two rounds I scored better I hit the ball better off the tee, when you hit fairways you can be more aggressive and attack pins. I tightened up in those two rounds and was able to score.”

Johnson, coming off a win at the Mark’s Blue Owl in Yorkton on the weekend is now preparing for his first professional event. Johnson will travel to Prince Edward Island later this month and compete in the Mackenzie Tour PEI Open from Aug. 23 to 29. He will play in the Brudnell River Classic on the island as well and will know this week if he gets into four more PGA Tour Canada events including the Elk Ridge Open in September. Johnson admitted his first rounds are holding him back slightly and he is working on ironing out the early kinks ahead of traveling east.

“It’s really becoming a trend over the last year or so. I don’t really know what it is, obviously I like playing from behind. Something I’ve been trying to work on is getting into that playing from behind mindset off the first tee on the first day. Getting off to a better start is definitely something I’ve noticed and trying to work on for sure,” he stated.

Saskatoon’s Ty Campbell finished in a tie for 29th at the championship, he was 1-over, 285. Roman Timmerman of Saskatoon tied for 35th at 2-over, 286. Regina’s Tyler Wright was the other player to make the cut, unfortunately for Wright he was dealing with a bad back and had to withdraw after making the 36-hole cut.