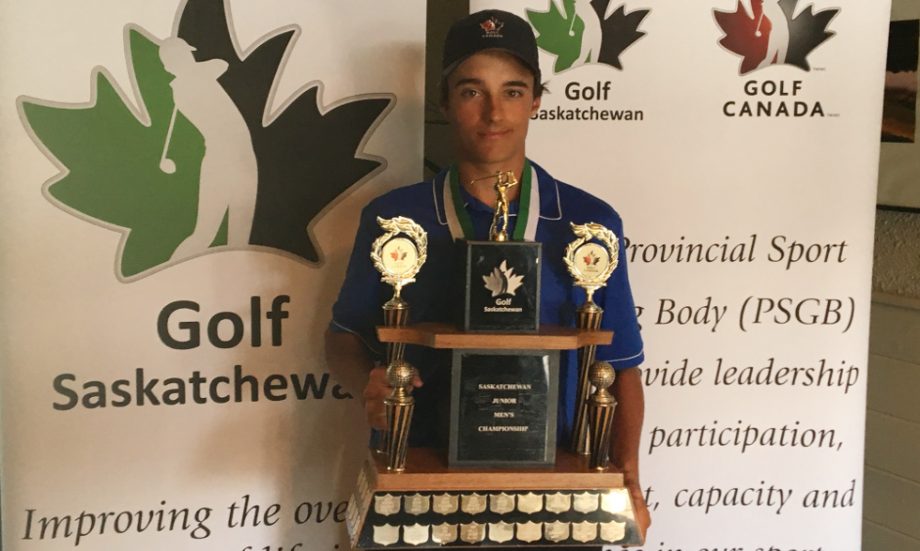 Josh Nagy has been to the National Junior Men’s Golf Championship before but now he’s attending as a provincial champion.

“It feels great, I won here a couple weeks ago on the Maple Leaf Junior Tour (MJT) and I really wanted to get this,” Nagy told reporters after the win.

Nagy had to come from behind for the victory. He trailed Saskatoon’s Connor Scissons by five strokes after round one. Nagy improved on his first round 76 by carding 68 during round two which vaulted him into the lead. Weather conditions heavily deteriorated during the final round leading to shifting of the leaderboard behind Nagy but his 79 held up enough for the win. He said playing well over all three days was key.

“I was pretty consistent, I kept the ball in play most of the time. I had one bad hole today, but the week was good,” he said.

Nagy will lead Team Saskatchewan into the National Junior Championship later this month in Medicine Hat, Alta. Nagy qualified for the event last year through the MJT. He said attending the tournament as a provincial champion has a special feel.

“To be on Team Saskatchewan is a big honour, it feels awesome,” he said.

The tournament format does feature divisions broken down by age, you can see the complete results here.

The Junior Women’s Championship wasn’t as close as the men’s side, Shell Lake teenager Brooklin Fry tore past the field Wednesday running away with an 11-stroke victory over Ella Kozak.

Fry had a one-shot lead over Carey Mclean after round one, Mclean jumped over Fry during the middle round, but Fry wouldn’t be denied in the third round. The 13-year-old shot her third straight round of 83 to secure the provincial title with a total of 249. Fry said she couldn’t take a shot off throughout the tournament.

“I just had to make sure I was playing my best because we don’t play with everybody, so you don’t know what they shoot. I just tried my best to get to the top,” she said.

Saskatoon’s Sarah Grieve placed third after beating Mclean in a one-hole playoff, both finished with scores of 261.

Fry will also lead Team Saskatchewan into the National Championships; the women’s event is slated for July 31 to Aug. 3 in British Columbia. She said her expectation was to be on the team at the start of the season.

“I kind of thought I had a shot, I was thinking about it,” she said.

Full results for the women’s championship can be found here.