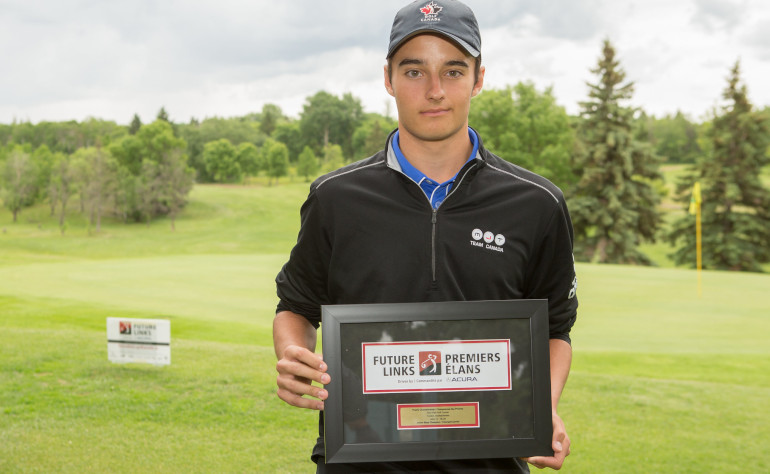 Sunday was all about Saskatoon’s Josh Nagy at the Future Links driven by Acura Prairie Championship in Yorkton.

The Riverside Country Club member came into the final round a shot back of Tae Kyoung Yun but by the time the smoke settled on the 54th hole of the event at Deer Park Municipal Golf Course Nagy was the winner by seven shots with a six-under, 66. He finished the event at three-under par overall. The reigning Saskatchewan junior champion started sluggish however he found his groove on the back nine and never looked back.

“Obviously this is an honour,” he said to media after the event. “I came in playing alright and it was nice to turn the week around on the last day,” he said.

Knowing he had to make a move if he wanted to win the Future Links event on the last day he didn’t change his routine after 36 holes.

“I came to the course, did my same routine,” he said. “I had a little hiccup on two and then I bared down on the greens and I was able to pass a couple guys.”

After the double-bogey on the second hole Nagy rattled off three birdies on the front nine to sit at one-under on the day. Another five birdies on the back nine allowed him to run away with the win. He said it was shortly after the turn when he could feel the day may belong to him.

“When I went up and down from the green side rough on 11 I knew if I kept the ball in play on the tee I could make birdie on a couple tough holes,” Nagy said.

With the win Nagy receives an exemption into the national junior boy’s championship later this summer and doesn’t have to qualify through the provincial junior tournament he won last year. He hopes to go play a Maple Leaf Junior Tour event in San Diego that would conflict with the Saskatchewan championship in Nipawin, so he is happy to receive the exemption on top of the win.

“I qualified through the tour a couple years ago and it was really nice so I didn’t have to worry about it at provincials so now hopefully I can go to San Diego and play well down there,” he concluded.

On the girl’s side of the championship, Hyeji Yang of Langley B.C. was the winner.

She was the leader after the second round and like Nagy got off to a slow start in the third round but found her game and cruised to the win.

“I was playing not bad overall during the week but today my game was struggling on the front and I couldn’t make my birdies when I had a chance,” she said. “On the back nine I knew Sherri (Yang, second-place) was close so I was pushing myself harder to get away from her. Starting on 13 my shots were coming back. On 16 I made a 15-footer birdie putt which gave me confidence and momentum.”

Yang finished her day five-under par and held off the field by seven strokes. She said her confidence was high coming into Saskatchewan this week.

“Coming into the Future Links Prairie Championship I knew I had a good chance to win this tournament. It means a lot to me,” Yang told Golf Canada.

Calgary’s Brooke Frerichs finished in third place. The top Saskatchewan player was Regina’s Autumn Neiszner. The Wascana Country Club member finished in fourth place at 28-over par. Her finish was enough to punch her ticket to the national junior girl’s championship. She said her play this week exceeded her own expectations.

“Reaching nationals was not my goal, honestly I just wanted place top-10 and golf my best,” she said. “I golfed really well and better than I thought and ended up finishing fourth which is good.”

Neiszner will now prepare for a couple Maple Leaf Junior Tour events in the next couple weeks prior to playing in the provincial junior championship despite her exemption. The 15-year-old said she’s happy with the start to her season.

“I’m really excited. I have a lot of tournaments coming up and this is great momentum.”

The complete leader boards and results can be found here.