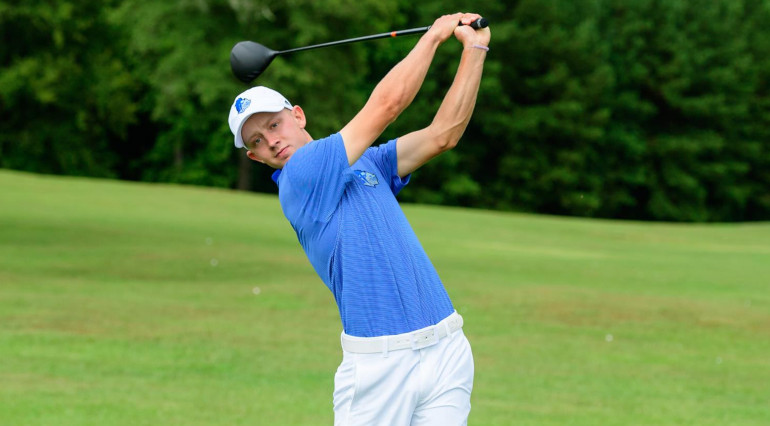 Ty Campbell picked up a top-10 finish this week in college competition. Photo-swuathletics.com/

The Saskatoon product and his Southern Wesleyan University Warrior teammates were at the Camden Country Club in South Carolina on Oct. 5 – 6 competing in the Camden Invitational. Campbell placed 27th overall in the 54-hole event shooting 12-over, 222 (73, 77, 72). Despite Campbell’s solid finish in the field of 68 players the Warriors as a team placed 11th overall.

Southern Wesleyan will host their own Classic on Oct. 13.

Kindersley’s Brody Istace was also on the course again this week south of the border.

Already with a top-five finish this season, the Music City Invitational at Twelve Stones Golf Club didn’t go as well for the junior Columbia International University (CIU) Ram junior. Istace carded rounds of 88 and 85 to finish in a tie for 64th. CIU placed 9th as a team in the 11-team tournament.

There is some positive news for the Rams as they have qualified for the NCCAA Championship in Palm Coast, Florida later this month. First the team will travel to Adairsville, Georgia for the AAC Fall Preview on Oct. 12 – 13.

Regina’s Jacob Kydd was also competing in the Music City Invitational for the Indiana Wesleyan University (IWU) Wildcats. The junior posted rounds of 84 and 80 for a 36-hole score of 20-over, 164. Kydd finished in a three-way tie for 56th. The team placed 6th overall.

Saskatoon’s Josh Nagy is in his second year at Robert Morris University near Pittsburgh. Nagy and the Colonials most recently played in the NKU Fall Classic in Lassing Point Kentucky. The two-time Saskatchewan junior boys champion finished in 68th place at 239 over 54 holes. The Colonials are competing at the Tom Tontimonia. Nagy is not in the field.

Several other Saskatchewan players are attending university south of the border, but schedules are postponed due to the pandemic. You can see more here.