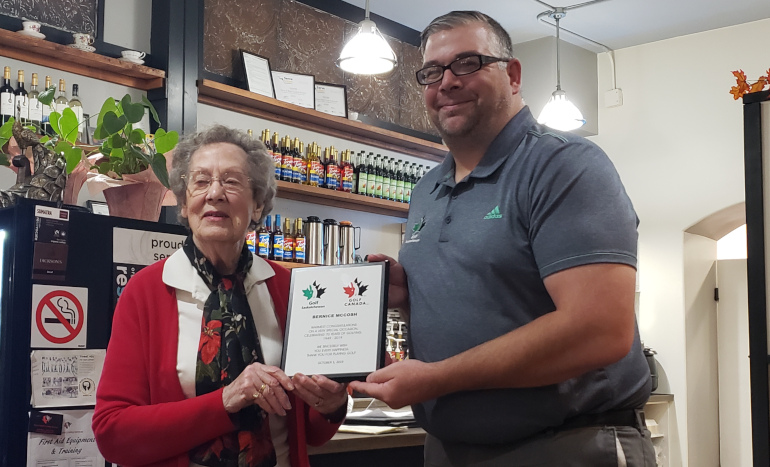 Melfort's Bernice McCosh receives a plague from Golf Saskatchewan as she retires from the local ladies club.

The Melfort Ladies Club hosted their annual wind-up Tuesday night at a local eatery just like the group does at the end of each golf season but this year’s event was extra special.

Long-time Melfort Golf Club member Bernice McCosh is hanging up her clubs after 70 years. The ladies play twice a week during the season and for over seven decades McCosh has been a part of the club. She has been a mentor to hundreds of women over the years and has inspired junior girls to take up the game as well. Golf Saskatchewan was on hand to present McCosh with a plaque to commemorate her nearly lifelong devotion to the game since she move to Melfort in 1947.

“It was a very pleasant surprise,” McCosh told Michael Oleksyn of the Melfort Journal following the presentation.

“My friends golfed, my husband-to-be golfed, it’s a way of getting out, the fellowship of the club,” she added when asked why she took up the sport.

Sherry Mahon has been the president of the Melfort Ladies Club for the past two years. She presented McCosh with a bouquet of flowers as well and stated “Bernice, you are an inspiration to us all and golfing with you has been an absolute pleasure.”

Golf Saskatchewan Executive Director Brian Lee couldn’t attend the celebration as he is in Ontario attending Golf Canada meetings but he passed along this message.

“You have been actively involved in the Melfort Ladies Golf Club, helping with the junior girls golf program and introducing golf to the younger generations. As you reflect upon seven decades of golf memories, know that you have inspired young women along the way, to participate in golf for a lifetime.  At 92 years of age, you are a true role model for us all, embodying the expression, age is just a number.”

When away from the course McCosh is an accomplished organist and pianist. She was president of the Melfort Music Festival for years and is a past Melfort Citizen of the Year.