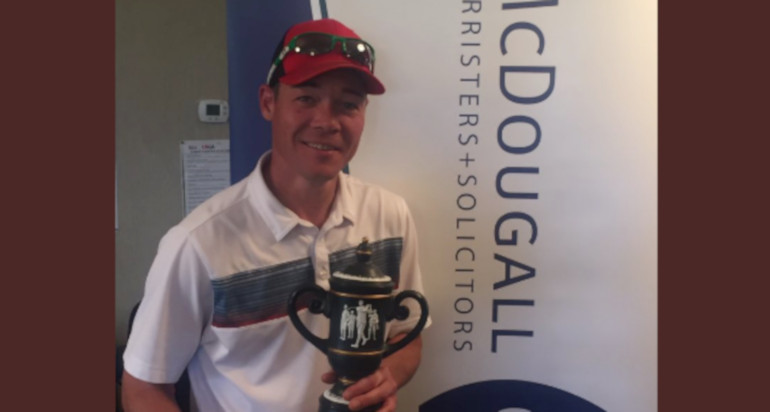 Wascana Country Club member Ryan McNall has his second men’s Order of Merit Tour (OMT) win of the season and sits first overall in the standings after claiming his fifth Publinx Championship.

McNall defeated Carson Harcourt in a four-hole playoff on Sunday at the Tor Hill Golf Course in Regina picking up 500 OMT points and vaulting over Lobstick victor Danny Klughart. McNall said he wasn’t on top of his game and some luck may have been involved.

“I grinded it out really, I didn’t hit it very good, I didn’t have much going,” he said.

After being three-over through five holes during round one, McNall battled back to finish the round at an even, 71. Jace Carlisle was the first-round leader at 68. McNall opened round two with a bogey, parred holes two up to 11 before another bogey at 12 dropping him to plus-2 and trailing Kipling’s Harcourt and his brother Shawn McNall. However he managed to birdie the par-five 16 and 17, a “tough” par three. McNall had a chance to birdie out on 18 to win but had to settle for par and the playoff.

“I heard had Carson finished even so I knew I was in a playoff, but I got lucky at the end,” he admitted.

The playoff started on hole 18, neither player could grab the edge until Harcourt got into trouble on hole 3 North allowing McNall the victory. Harcourt does pick up 400 OMT points and sits third overall. McNall hasn’t finished lower than third in four events this season. He said the amateur tour is enjoyable when the players are so competitive.

“It makes it fun for sure, you don’t have one guy that stands out,” he said. “In a tournament like that there is probably eight different guys that could win it. It’s always fun when it comes down to the end.”

Shawn placed third just a stroke back and earned 350 OMT points, he’s fourth in the OMT race. Carlisle placed fourth in the tournament, Travis Fifi rounded out the top-five just three strokes off the leaders.

McNall hasn’t played a national event since 2017 at his home course of Wascana, the mid-am. He said his strong start to the year has refueled his passion for competitive golf.

“I’m going to play in more tournaments than I ever have this year. We will see what happens with the OMT. Last year I didn’t go to nationals so I’m planning on doing that if I can qualify,” he said.

Next up on the tour is the Reliance Gregg’s Central Amateur at the Saskatoon Golf and Country Club on June 29 to July 1. The province’s top amateurs will look to use the event as a tune up for the Golf Saskatchewan provincial amateur and mid-am at the same venue two weeks later.

Yorkton’s Kade Johnson finished in a tie for sixth place this past weekend at the rain shortened Glencoe Invitational in Calgary.

Sitting as high as fourth at one point with five birdies in round one, Johnson closed the second, and last round with back-to-back bogeys to finish the 36-hole tournament at two-over par. The event is a three-round championship, but Saturday’s 18 holes were rained out.

Saskatoon’s Ty Campbell was also in the field, he finished in 46th place at 17-over par.

Meanwhile in Manitoba at the City and District Championship in Carman, Yorkton’s Ella Kozak posted a 31-over par to claim a top-10 finish at the event.

The 13-year-old shot a 15-over, 87 during round one and an 88, 16-over during the second and final round of the championship that featured a field of 23 women amateurs, Kozak was the only junior entered.