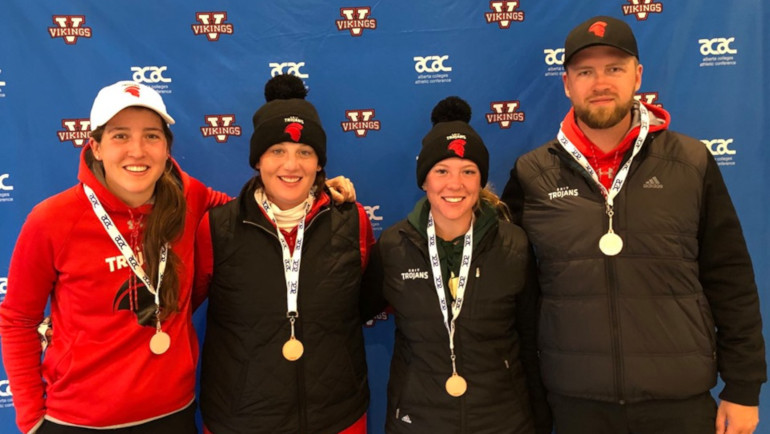 The SAIT Trojan finished with a 54-hole score of plus-36, 252 (80, 81,91) at Coal Creek. McLean led the event with five birdies over the three rounds. She was the leader after the second round but the Turcotte sisters played their best rounds on the final day to slip past McLean.

“It’s a little bittersweet because I knew what I was capable of and I didn’t accomplish it,” McLean said following her round. “But, I know I made the team proud. My club selection wasn’t great today, and when I got frustrated I let it affect my putting.”

Along with her bronze medal in the women’s individual event McLean collected a team bronze and a mixed team silver. With the Trojan’s third place finish they have qualified for the Canadian Collegiate Athletic Association National Championship in Sorel-Tracy, Quebec from Oct. 14 – 18.

Alex Schmidt is coming off two podium finishes for Lewis-Clark State, but the Warrior Fall Invite didn’t go as well for the Regina golfer.

Schmidt carded rounds of 79 and 83 landing her in 12th place.

Lewis-Clark had two teams in the event at the Lewiston Golf and Country Club on Sept. 30 – Oct. 1. The two Warrior clubs tied for third place.

The team is now preparing for the Lilac Invitational in Spokane, Washington on Oct. 7 – 8.

Brody Istace had a great performance for his school, the Columbia International University Rams with a tie for 11th place.

The Kindersley native fired back to back rounds of 79 to finish at 14-over par at the NCCAA South Region Tournament at the Columbia Country Club.

As a team the Rams were second in the five-team event. Next up is the Redhawk Fall Collegiate Invite in Pulaski, Tennessee from Oct. 6 – 8.

Marc Sweeney and his University of Southern Carolina Beaufort teammates competed in The Invite at Innisbrook in Palm Harbor, Florida on Sept. 30 – Oct. 1.

As a squad the Sand Sharks moved up four spots on the second day of the event and placed fourth overall. The team will travel to Adairsville, Georgia for a three-day event beginning on Oct. 20.

Carson Harcourt and the Minot State Beavers were at an event in Lemont, Illinois on Sept. 30 and Oct. 1.

Their next event will be the Blue Tiger Invite at Lincoln University of Missouri on Oct. 13 and 14.

On Sept. 28 Carlisle shot an opening round score of 79. Day two was cancelled.

The Lakers will travel to Northwood University in Midland, Michigan for a tournament on Oct. 6 and 7.