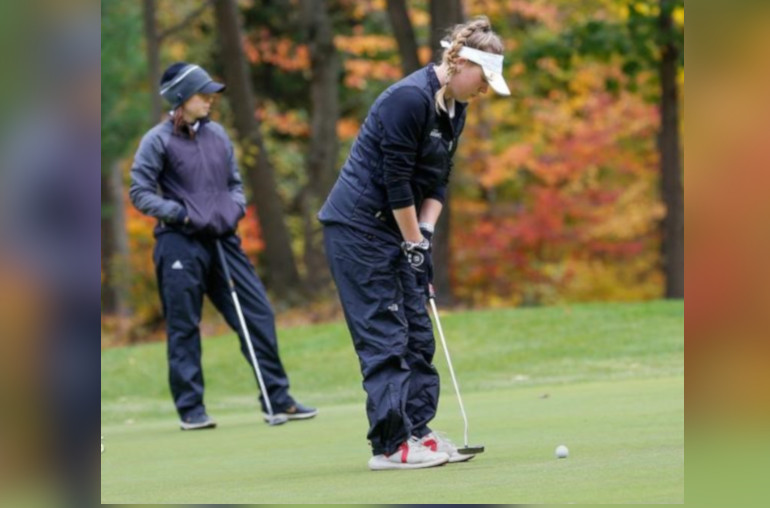 McLean is attending SAIT in Calgary where her and the Trojans recently competed in the Canadian Collegiate Athletic Association National Championships near Montreal. She said the national experience was a great way to end her first year which was successful.

“It was pretty good,” she said of her rookie season on the Alberta Collegiate Athletic Conference (ACAC) circuit. “I was kind of surprised how well it went. Going into it I didn’t know what to expect in the tournaments, but after playing our first one I got used to it. We play with the same girls, they are really nice, I’ve made so many friends, and the girls on my team, I love them.”

The highlight of McLean’s first year would be the ACAC Championship. She was leading the event after 36 holes, but she ended up claiming a very respectable bronze medal for a third-place finish. The Trojans as a team also claimed bronze earning them a trip to Ste-Victoire De Sorel, Quebec. Leading up to the two championship events McLean said she had plenty of support throughout the season.

“My coach was really happy, my parents are proud,” she said. “I wish I would have done a little better in some events, but I can’t change the past now. I can always improve for next year.”

McLean finished in 19th place at plus-53, 269. She felt the nerves in round one shooting 94 but her game got better in the weather-shortened event. The 72-hole championship was cut to 54 holes. She shot 87 during round two and 88 in her final round. She said earning a trip to the championship and the experience was positive.

“It was a little nerve-wracking that’s for sure,” she admitted. “Going into it we wanted to have fun, we knew we wouldn’t win, but just to go there and play and see the course and how beautiful Montreal is.”

Now that the season is over and Calgary courses are shutting down McLean said she is using the time to catch up on her school work. The team continues to practice once a week in a dome and the Trojans also hit balls on their own to stay sharp for the next season. McLean is a regular on Saskatchewan Order of Merit tour and expects to compete in the Saskatchewan Women’s Amateur and hopes to be back on the national stage in the future. She said the experience she is getting at college is making her a better player overall.

“I think so, I know I am always going to have nerves when I play, I guess that’s normal hopefully,” she laughed. “If we go again next year I will be okay, I’ve done this before, I can do it again and hopefully have better results.”