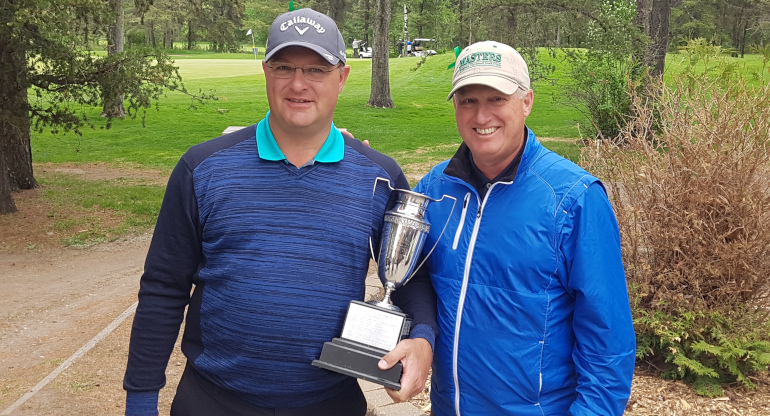 A chip in from the fringe was inches from falling to secure Pat Marcia a Scotia Wealth Management Open win on the 36th hole of the event but as fate would have it the victory took another 600 yards.

Marcia could have earned the win on the 18th hole at the Evergreen Golf Course on Sunday via sinking a chip but a solid second round effort from Lloydminster’s Clint Schiller forced a sudden death playoff in the event. Marcia went left off his tee shot during the playoff hole, the 600-yard hole one. Schiller was true up the middle, after two shots each golfer was just approximately 75 yards shy of the green. Schiller landed his approach on the dance floor; Marcia hooked his shot a tad too far and right onto the back fringe. The Regina based Canadian PGA professional showed some fantastic touch chipping in for birdie putting the pressure on Schiller and his 12-foot putt. Schiller just lipped out giving Marcia his first Scotia Wealth Management Open title.

“This feels fantastic,” he said after the win. “The Evergreen is one of my favourite courses in the province. I come back here all the time, it’s awesome.”

Marcia had a very similar chip shot on the 36th hole to win and he just slid it by the hole.

“I just said I have one chance to win here, give it your best shot,” he told Golf Saskatchewan about the moment. “Luckily I was able to make par and get to a playoff and get it done.”

The victory was Marcia’s first in the event. He has been in the final group three times and has been second place on two occasions. He said getting the victory was a little bit surprising at this point in the season.

“I definitely didn’t see it coming, my game was not trending in the right direction, but I like where it’s at after this, this is great. It was pretty cool in the playoff to chip in there, it was a pretty special moment” he added.

After round one, Marcia was tied with amateurs Danny Klughart (Prince Albert) and Drew Kocur (Regina) at one-under, 70, the group was the last to tee off Sunday. Schiller was three back going into round two and posted a 70 of his own to force the playoff. Marcia said having an event with both professionals and the top amateurs across the province the field is tough to beat.

“Danny and Drew hit it so good, they are young guys with a lot of strength, they were pounding it by me all day. They are very impressive. This is really cool, there’s not a lot of tournaments in the province where us professionals get to play with amateurs and mingle. This is truly is one of the strongest field of golfers in the province because of it,” Marcia said.

Klughart ended up in a tie for third along with Regina’s Ryan McNall, who is fresh off a Regina Amateur Men’s win. Cory Sawchuk of Prince Albert rounded out the top five. A handful of players were tied for sixth at plus-five.