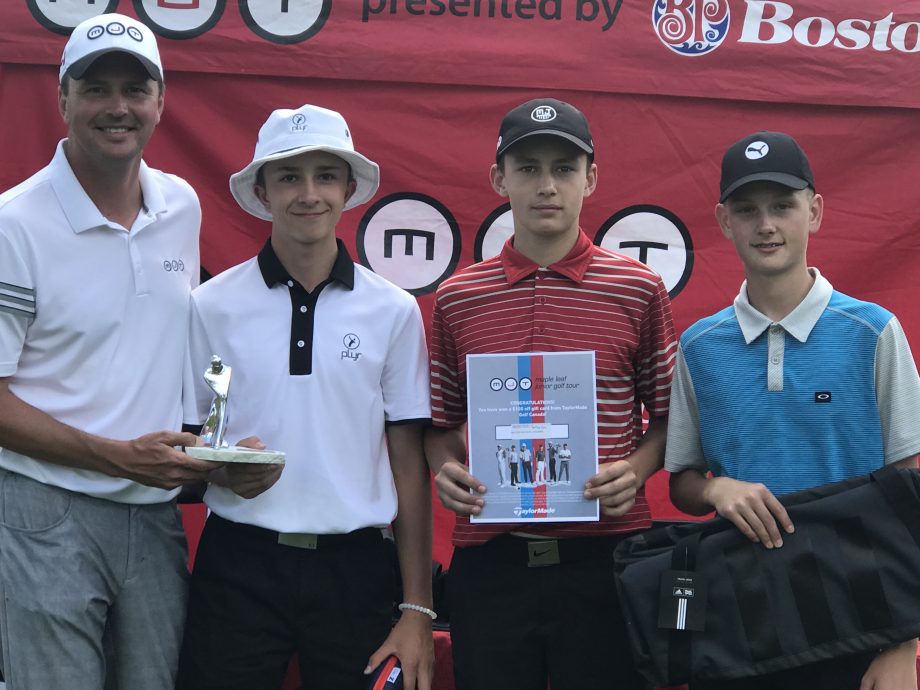 Regina’s Will Blake continued his strong season with his second consecutive win on the MJT in the bantam boy’s division. The 14 year-old shot a two-day total of 155 (80, 75). Blake finished three under par in his last three holes to win by one shot over Brett Leonard, 13, of Corman Park. Blake said he could feel the pressure from the players behind him.

“I knew Brett was one up on me (on 18) so I knew I had to make birdie at least. I was lucky enough to hit it tight and make an eagle. It feels very good to win back-to-back events. I have to give credit to Brett, Alex (Swinnerton, of Saskatoon, 80-77) and Cort (Tunall, of Kindersley, who finished with three straight birdies, 82-77) as they all played very good and put lots of pressure on me.”

Griffin Wilson of Swift Current was victorious in the junior boy’s division for the third time in three weeks. The 17 year-old was able to hold off Warman’s Parker Noln-Ens by two strokes; Brayden Nestman of Avonlea finished in third at 163, five back of Wilson. Wilson said he didn’t have his best weekend but he found a way to win.

“I didn’t play the way I wanted to but grinded it out on the final day and won.”

In the juvenile boy’s category, Battleford golfer Colby Friedrich, 16, fired 80 and 81 over the two-days securing a five-stroke win over Estevan’s Chase Gedak. Cole Jenkins of Prince Albert fired 170 to round out the top three. Friedrich said being on his hometown course helped his game.

“It feels good to win again, especially at my home course. I’ve been struggling to win so the break through is nice,” he Friedrich.

On the girl’s side, two different age groups were represented, Shell Lake’s Brooklyn Fry, 13, shot an impressive 172 (87, 85) to outlast Yorkton budding star, 12 year-old Ella Kozak by 11 strokes in the U15 category. Finishing in third place was Regina’s Autumn Neiszner.

You can see all the results as well as the latest Order of Merit (OOM) standings here.

The next tour stop in Saskatchewan is the MJT Golf Saskatchewan OOM Series presented by Ilta Grain at Moon Lake Golf and Country Club in Saskatoon, June 30 and July 1, where exemptions into the MJT International Players Championship presented by Miura Golf in Jasper, Alta. are on the line.

With files from the MJT’s Elaine Denton.