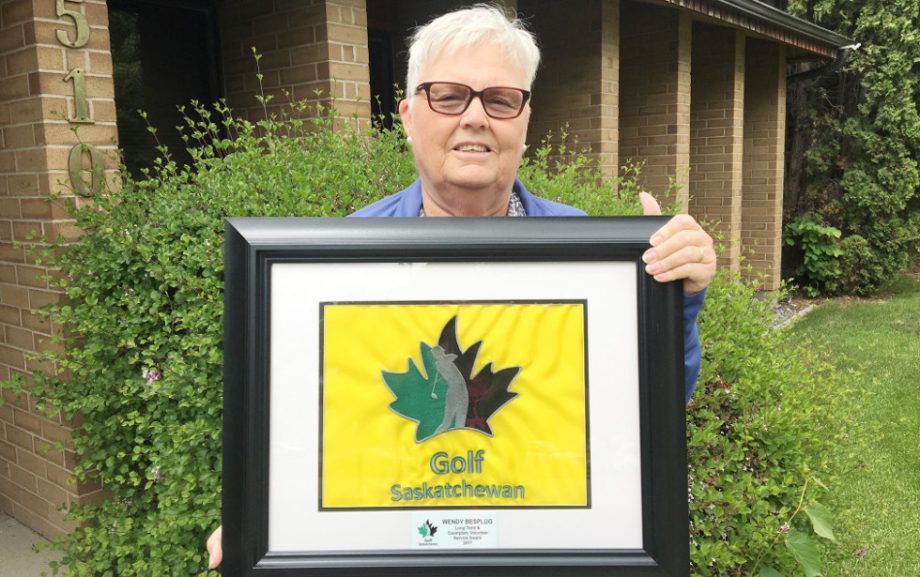 Wendy Besplug visited the Golf Saskatchewan office this week as she prepares for another summer volunteering.

With golf season in full swing, Wendy Besplug is back on the highway as a volunteer Golf Saskatchewan course rater. The Kindersley, Sask. raised Besplug is also the 2017 volunteer of the year. She has been rating courses for almost 15 years covering every corner of the province. Besplug has been involved in the game her entire life playing with her grandparents and parents in Kindersley and Waskesiu. She said taking up course rating gave her a new perspective on the game.

“You get to know more about the game which helps your own game. Course rating changed my game and the way I played. It taught me to look for other sources of trouble rather than just bashing the ball down the middle of the course,” she said.

In her early years of rating Besplug rated many courses in the North, a highlight for her was seeing family-owned Northern Meadows Golf Club in Goodsoil expand to 18 holes. She has rated the course on three separate occasions. Besplug has toured more southern “prairie style” golf courses in recent years. She said she appreciates everyone of them.

“There is no bad golf course in this province,” she said. “They are all unique to themselves.”

Besplug estimates she’s rated over 60 courses. She averages about five per year, she did have to take a couple years off. She fell ill with West Nile in 2014 and later battled cancer. She has already rated Maple Creek’s course this year with her husband. After all the years driving around the province she said the Southwest town was a new stretch of road.

Looking back on her honour last year of the volunteer of the year, Besplug said the people she has met and the friends she’s made is the payoff. She said the support poured in from the golf community during her illnesses. She said the award was special to her.

“I can remember saying it’s amazing what can happen when you have fun. I watched people like Con Hammer and Moe Martin win the award. To me their hours and hours of dedication was undeniable, I didn’t put myself in that category. I was just having fun,” she said.

Besplug also volunteers at tournaments across the province, she will be assisting at the upcoming senior’s championships. She has served on the executive board and spent some time working in a rules capacity but appreciated the rating aspect. She said she enjoys the junior events and watching the young golfers develop their games as well. Overall, she said volunteering for the organization is a fantastic experience.

“We all have a common interest and that’s the love of golf. The more you can learn about the game, it’s the fact we all have that in common. That is what binds us together, it’s a no-brainer,” she said.