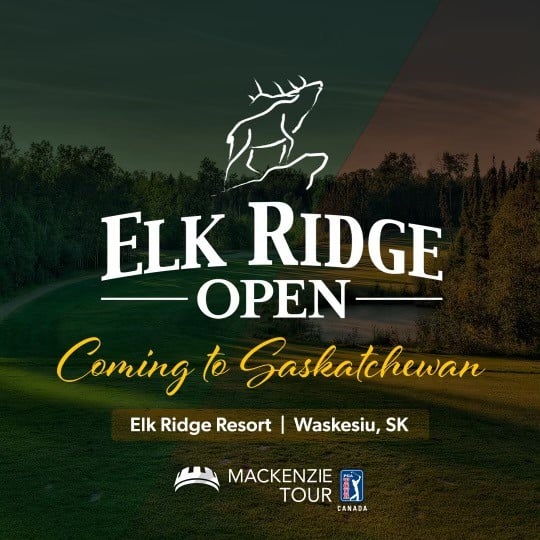 Landmark agreement makes Saskatchewan event part of the Tour through 2028

TORONTO, Canada—The Mackenzie Tour – PGA TOUR Canada officially announced Tuesday the creation of the Elk Ridge Open, a new event taking place at Elk Ridge Resort in Lake Waskesiu, Saskatchewan. The tournament, set for the week of September 6, is one of the eight official tournaments on the recently announced Mackenzie Tour – PGA TOUR Canada season. The Tour and the Elk Ridge Open entered into an eight-year deal.

Elk Ridge Resort is known as Saskatchewan’s premier all-season resort and was recently purchased Routes2SK, owned by a group of eight born-and-raised Saskatchewan professionals. Routes2SK is committed to honouring the legacy of the property founded by Arne Peterson in 1994.

“We are absolutely thrilled to be partnering with the PGA TOUR to bring high-caliber professional golf back to the province,” said Managing Partner Ryan Danberg. “Our partnership group is extremely proud of Elk Ridge Resort, and we can’t wait to showcase the property to the world through our partnership with the Mackenzie Tour.”

“We are very excited to be returning to Saskatchewan, and we can’t thank the partners at Routes2SK for their unwavering commitment to their community and Elk Ridge Resort,” said Mackenzie Tour Executive Director Scott Pritchard. “We truly believe we have all the ingredients to make this one of the favourite stops of the summer on one of the best golf courses in the province. It will surely provide a great test for our players.”

The Elk Ridge Open is also pleased to announce that Saskatchewan native Graham DeLaet, a current PGA TOUR player and Mackenzie Tour alumnus, will serve as the tournament’s honourary chair. DeLaet is well known in Saskatchewan for his family’s philanthropic endeavours. The Graham and Ruby DeLaet Foundation has been focused on improving the health and wellness of children, as well as supporting the development of junior golfers at all stages. The Foundation is an extension of previous charitable efforts, which have provided valuable contributions to Golf Saskatchewan, the Canada Junior Golf Association and the Weyburn & District Hospital Foundation.

“I look forward to serving as the honourary chairperson for the Elk Ridge Open in my home province,” DeLaet said. “Elk Ridge Resort is a world-class facility, and I’m excited to work with the new ownership group looking forward to making this significant impact in the community and Saskatchewan.”

This 2021 tournament will mark the first time the Mackenzie Tour has been in Saskatchewan for an event since 2016. The Tour held the Dakota Dunes Open at Dakota Dunes Golf Links just outside of Saskatoon for eight years.

“This is an exciting opportunity to showcase Saskatchewan’s world-class recreation and tourism industries,” explained Saskatchewan Premier Scott Moe. “The economic spinoff generated by this event will have a significant impact on Elk Ridge and area for years to come.”

VMC Sports & Entertainment, led by President Hugh Vassos, will serve as the host organization for the Elk Ridge Open. VMC has a been involved with a number of Mackenzie Tour events in the past, having served in a similar role for the Dakota Dunes Open. Currently, VMC acts as the host organization for the GolfBC Championship in Kelowna, British Columbia, which is known for its significant impact in the Okanagan region.

“We are elated to be involved with the Elk Ridge Open and Routes2SK, bringing the Mackenzie Tour back to Saskatchewan. This is exciting news for Saskatchewan especially for the tourism industry as we come out of a pandemic that has devastated the sports-event business,” said Vassos. “Elk Ridge Resort will be the perfect venue for the Elk Ridge Open and many of the other ancillary events we have planned. I look forward to our team at VMC Sports & Entertainment providing event-management services and personally serving as the Tournament Director for this world-class event,” added Vassos.

Elk Ridge Golf Course is a 27-hole facility designed by Bruce Klassen and Blaine Fagnou. The Mackenzie Tour players will be playing a composite course, which will measure more than 7,000 yards and play as a par-70. In the past, Elk Ridge has hosted a number of provincial amateur and professional events, as well as Golf Canada’s Senior Women’s Championship.

The Mackenzie Tour – PGA TOUR Canada is a series of tournaments played across Canada each summer, where tomorrow’s stars begin the path to the PGA TOUR. In 2021, because of restrictions at the Canada-U.S. border, the Mackenzie Tour is for players based in Canada. The Mackenzie Tour’s mission is to deliver a PGA TOUR experience for its members, fans, volunteers and partners in order to develop the future stars of professional golf and enrich the communities it visits.