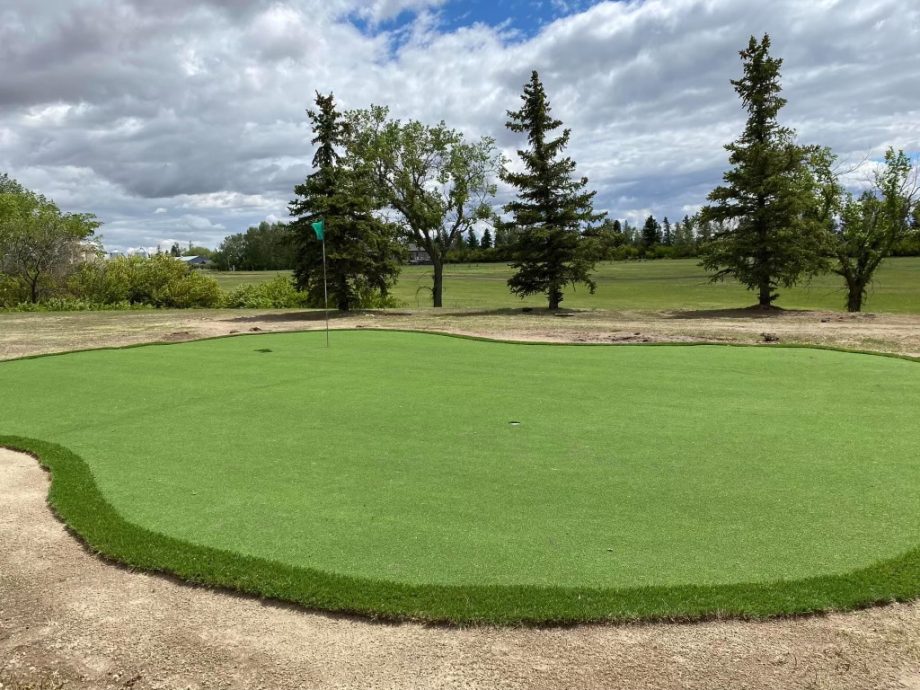 A younger, committed, driven group of Luseland area residents with assistance from a lot of know-how are revitalizing Luseland Bells Acres Golf and Country Club.

Curtis Reschny farms the land near the nine-hole course and lives in the community of 600 people on with a view of the course that opened in 1963. He told Golf Saskatchewan that the recent conversion of their sand greens to synthetic grass has lit a spark among the town and area.

“After seeing the enthusiasm from the people in the area and from the community after we did the greens its really motivated us to carry on and keep doing what we’re doing,” Reschny said.

Talks of transitioning the greens to synthetic grass began with thoughts of replacing just a few at a time over a longer period, but on the advice of secretary-treasure Ryley Magnus who has a financial background suggested the club fundraise and replace them all. The funds raised before construction began and the project was paid off with monumental support according to Reschny.

“We have had fantastic support from the community and surrounding area, it’s been unreal,” he beamed. “The support has been phenomenal; people are happy to see things going on.”

Next on the club’s wish list is an upgrade to the irrigation system that the group hopes will build more momemtun coming off their busiest season ever. With upgrades to the watering system the club will also touch up around the greens.

“We’re doing hydro-grass seeding around the new greens, same as any construction site, they had their skid-steers digging out the old sand greens. Around the greens is not the way it should be so this spring we have a contractor company lined up to hydro-seed some nice grass and get around the greens cleaned up,” he said.

Last year the club also put some care into the clubhouse with fresh paint, flooring, some appliances and other minor upgrades. This year the plan is to construction new washrooms to accommodate the growing crowds for men’s night and everyday play.

The course purchased two carts for rentals that were very popular. More carts are eventually planned according to Reschny.

In the past the club has hosted a ‘Bosses Night Out’ event that Reschny described as a community Christmas party. Due to COVID-19 the event is on a two-year hiatus. An online auction is currently underway on Facebook that features over 100 donated items. The auction closes Saturday night at midnight. It’s expected to raise over $30,000, well above their goal. Overall, the future is bright at Bells Acres and Reschny is confident the club will continue to be a vibrant, key meeting place for the town and region.

“This little community is getting more young people sticking around so they’ve joined the committee and they are eager. These young people are ambitions, they want to improve it, it’s been really good. I’m not taking anything away from what anybody, but the young blood has been really great.”