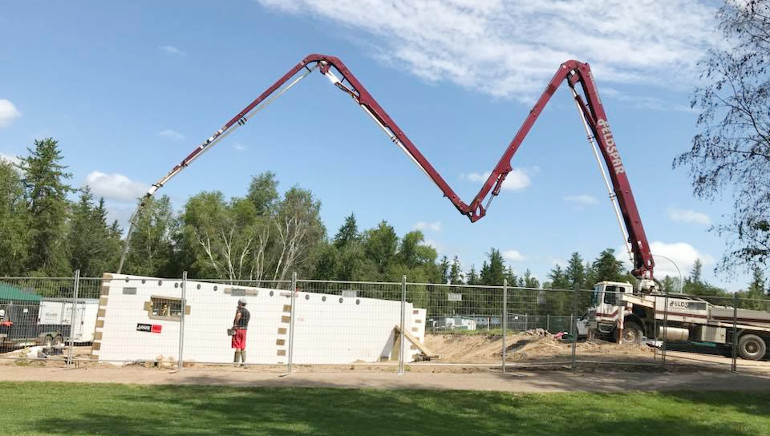 Progress is coming along for the Loon Lake & District Golf Club's new clubhouse.

In June of last year Loon Lake and District Golf and Country Club lost their clubhouse to a fire. One year later the vision of a new facility tucked into Saskatchewan’s northern forest is becoming a reality.

Construction of a new building that will feature a restaurant, lounge, proshop, meeting room, and 85-seat banquet room got underway at the start of July this year. The building is expected to be complete in November. The course located in Makwa Lake Provincial Park has been using a 60-foot trailer as a clubhouse since the blaze destroyed their facility. Proshop manager Heather Schneider said the golf course traffic hasn’t seen a decline but other avenues of revenue have had to come to a standstill.

“We’ve had to put all our tournaments on hold, we don’t have an eating facility,” she told Golf Saskatchewan. “Everyone is excited to get the clubhouse up and going and getting back to normal.”

The nine-hole, grass green course features lake front views, a waterfall, bunkers and plenty of trees “with lots of balls in them,” Schneider joked. She said superintendent Mik Carey has done a great job with the course in his over ten years at the club. Schneider said the trailer has had a few challenges, but the shape of the course has outweighed any shortfalls.

“It’s been fine, people have been really cooperative. People have adapted to the situation. The golf has been great, both last year and this year we’ve been busy with golfers,” she said.

Insurance is covering the costs of the new facility allowing the club to move along nicely with the rebuild. Schneider said now that there are walls formed and progress is being made excitement is building among campers and the locals.

“Now that they see the clubhouse come up there is an excitable vibe in the air and people are anxious, but golfing has continued as usual,” she said.

The club expects to have the new facility operational in May of next year.