Longest day of golf nets over $4,000 for Kidsport 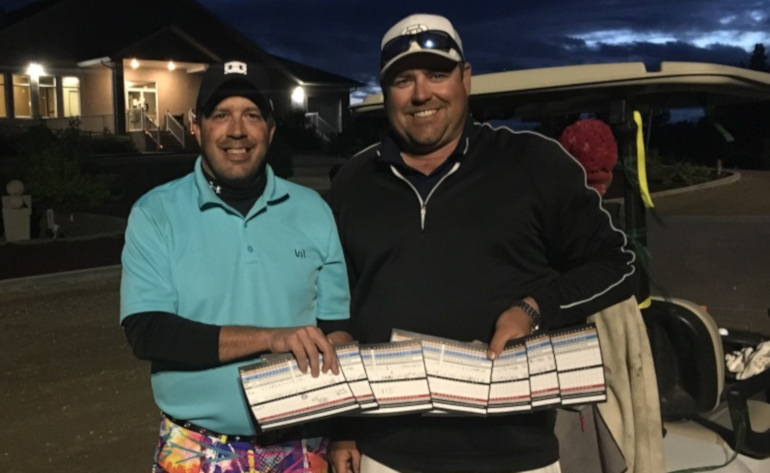 With an original goal of raising $1,500 for Kidsport Saskatewan, Estevan’s Brian Fitzpatrick “crushed” the mark during his “longest day of golf” venture..

On June 22, Fitzpatrick and Carnduff’s Kris Carley played 115 holes at the TS&M Woodlawn Golf Course taking pledges and raising funds through gofundme for the provincial organization that helps kids get into sports that can’t due to financial difficulties. After playing for 17 straight hours, the sore and tired twosome spoke with discoverestevan’s Nick Neilsen.

“Today during the round quite a few donations came in through the gofundme page as well as people coming up to us saying you guys are doing a great job and giving us money,” Fitzpatrick said.

With a final tally of $4,300 raised as of June 25, Fitzpatrick was excited for the grand total.

Originally the plan was for Fitzpatrick to go about the initiative on his own with a goal of 90 holes, but Carley wanted to be involved in some way.

“When he started the gofundme and there was money coming in I wanted to donate to it but I didn’t know how I was going to do it,” Carley explained. “As I got thinking about, one guy out here if the course is full he’s going to be pulling his hair out. I sent Brian a message and asked if he wanted company for the day and he said that would be great. By yourself it would have been pretty boring, I thought I would come on board and I set my donation on how I played.”

The better Carley played; the more money would be raised.

“I figured playing was the best way to do it, I set my parameters at a dollar for par or worse, two dollars for every birdie and $10 for every eagle and I would match Brian’s too. I think I got us to about $185 today through all the holes played,” he said.

The official longest day of the year is June 21, but the Woodlawn was hosting a tournament forcing the pair to move the date a day later. They did battle some wind and rain during the day but overall they are very pleased with the turnout.

Fitzpatrick is delivering the money to the provincial Kidsport office in Regina on Wednesday.