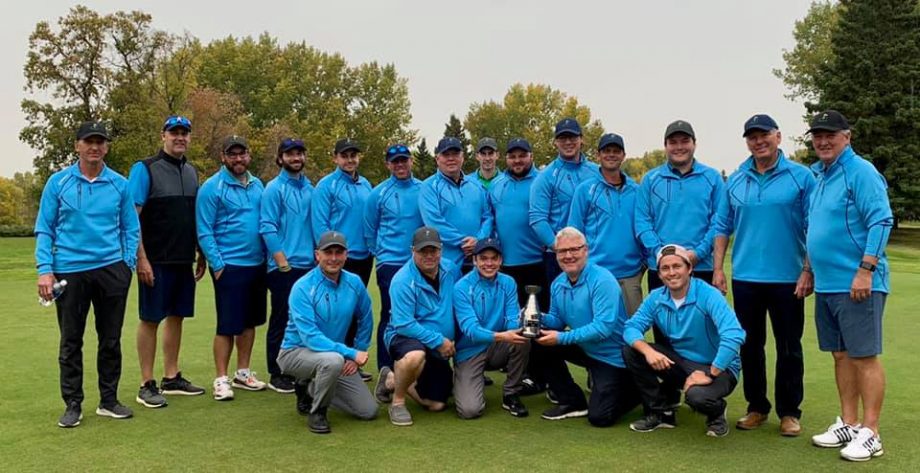 Cooke Municipal GC won the inter-club event vs. The Legends this year.

For the last two years golfers from The Legends Golf Course in Warman and Cooke Municipal Golf Course in Prince Albert have competed in an event pitting each clubs’ top players against each other.

No big prizes are on the line but plenty of bragging rights are. Former Prince Albert resident and Cooke member Travis Jenkins now calls Warman home and came up with the idea to have an annual event between the two clubs. Jenkins said the teams are quite large but that allows more players to represent their respective clubs.

“Last year we had 18 vs. 18 and this year we did 20 vs. 20,” he told Golf Saskatchewan. “Some people say the numbers might be too high, but it makes it that much more fun because more people get to be involved.”

The Legends hosted the event in year one, Cooke played host this season. Each team has one win using home course advantage. Jenkins said the difference in venues plays a huge part of the scores.

“You couldn’t get two more completely different golf courses,” he said. “Warman is windy, it definitely benefits the long ball hitter. Cooke, you don’t need to hit the ball long to play well there.”

Jenkins joked that home field has made for some lopsided scores over the past couple years. He said the pressure has been light but hopes scores tighten up in the future.

“It’s been a blow out both years,” he laughed. “In Warman I think we won by 13 or 14 points and at Cooke they won by 10 or 11 points. We haven’t had those final matches that it comes down to which would be amazing to have everyone watching and have someone come through for their team.”

Warman will host the event again in 2021. Jenkins said their club will be back on top of the friendly rivalry next year.

“Warman will be up 2-1 after next year,” Jenkins vowed.