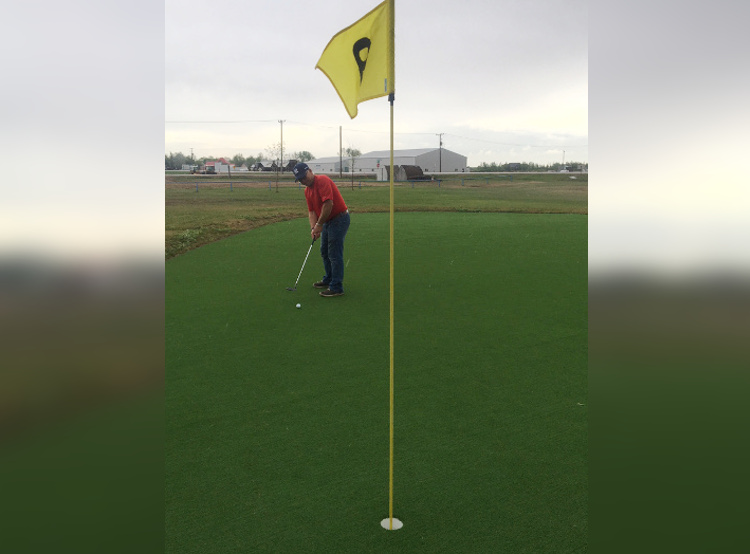 A few years ago, the staff and volunteers involved with the Lampman Golf Course knew something had to be done to save their facility.

Two seasons ago the club removed their sand and oil greens and replaced them with professionally designed and installed artificial turf putting surfaces. The club installed one artificial green on a pilot project basis which was a hit among the local members. President Blaise Fornwald said the surfaces won’t be mistaken for grass but are a solid, feasible replacement for small clubs.

“Everyone we talked to said they were alright, the greens aren’t like grass. They are harder to land on and stick. Members and the people that use the artificial greens like them though, they putt nice,” Fornwald said.

The course in Lampman was financially able to install grass greens but Fornwald said the long-term maintenance is tough for a small group of volunteers. The artificial turf needs to be brushed regularly, the club has a machine to keep up with the cleaning. He said the installation of the greens has made their club viable again.

“For sure, on the weekends now we have lots of people coming out, and lots of different people,” he said. “The greens have definitely turned the club around.”

Alberta based Mirage Putting Greens is the company that installed the surfaces for the Lampman course. President Randy Steinley said the Lampman project was the largest concept they’ve undertaken in the province. He said with over 60 sand and oil greens in Saskatchewan the market is ideal for the upgrades.

“It’s a good concept, there are a lot of sand greens still around,” Steinley said. “The feasibility, maintenance, and water supplies make it tough to keep grass greens with the budget they have.”

Mirage’s product comes with a 10-year guarantee and require only a cover when it comes to protecting the surface through Saskatchewan’s treacherous winter season.

Steinley said his company works with many private course and home owners in Alberta installing backyard putting surfaces or par-3 courses. He said the success and feedback provided by the Lampman users is opening doors to other courses in Saskatchewan.

“We’ve had interest from Grenfell, Beaver Flats, some other courses have also expressed interest,” Steinley said.

The company first started developing the surfaces in 1998.