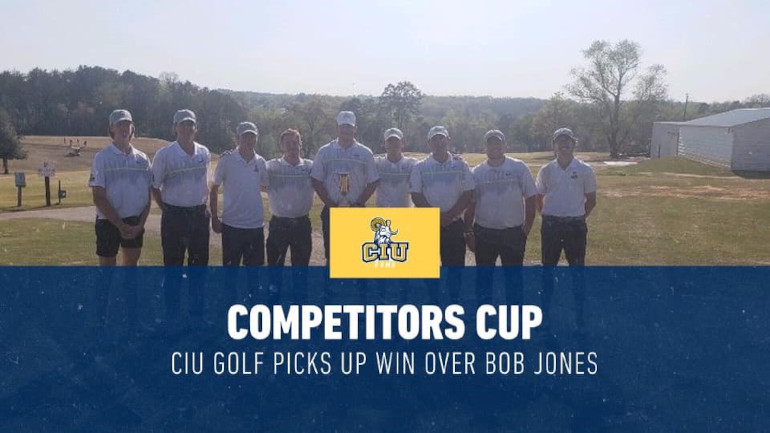 The CIU Rams are the Competitors Cup champions. Photo/ciurams.com

Regina’s Jacob Kydd has been busy competing on the collegiate golf circuit this spring.

The Indiana Wesleyan University (IWU) student was in Noblesville, Indiana on April 2 and 3 for the Purgatory Intercollegiate. Kydd posted scores of 74 and 79, his 9-over, 153 was good enough for a tie for 12th. That matches his career best finish since he tied for 12th at the Players Club Invitational in September of 2020.

Next up for Kydd and the team is the Shotgun Sagamore Shootout on April 12, also in Noblesville.

On day one, Monday the Rams picked up 8.5 of a possible 10 points. During the second day the Rams were victorious in five matches and lost four. Istace was instrumental in the victory sinking a birdie on the final hole to clinch the win. CIU coach Tucker MacDonald said the team performed well over two days.

“Brody had a clutch birdie on the last hole to clinch the Competitors Cup. This was an excellent event for our guys, and hopefully, we can take advantage of this momentum going into the conference championship.”

Their next tournament is the Appalachian Athletic Conference in Asheville, North Carolina on April 19 and 20.

Saskatoon’s Josh Nagy was in action on April 2 and 3 as well with the Robert Morris Colonials.

The two-time Saskatchewan junior champion is coming off a college career best 75 in his last competitive round in March. Nagy carded rounds of 81 and 78 this week at the FDU Invitational in Fayetteville, Pennsylvania. He placed 38th at 15-over par.

The Colonials tied for second place in the team competition. Their next scheduled tournament is in Clarksburg, West Virginia for the Health Plan Mountaineer Invitational on April 12 and 13.