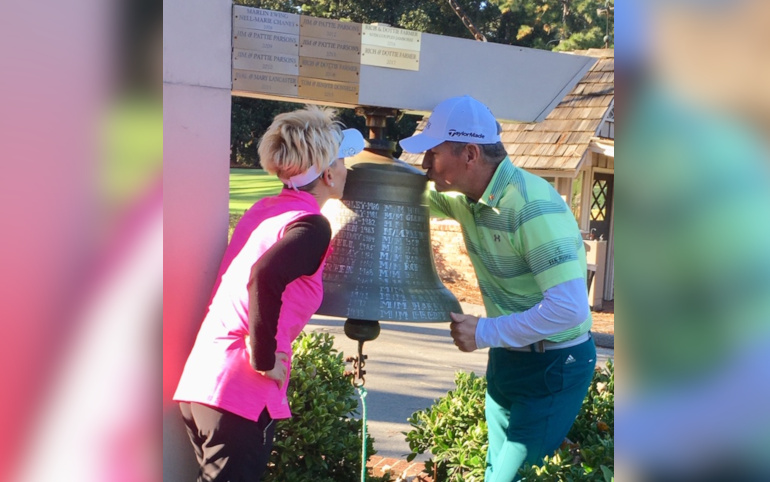 Golf is a huge part of Charene and Doug Kozak’s lives allowing the Regina couple to travel, meet new people, and see some success in mixed events along the way.

Most notably is the pair’s annual trip to Bermuda to play in the Pompano Beach Club’s Annual Couples Spring Tournament.  The four-day event features two rounds at Port Royal Golf Course, one at Tucker’s Point and one at Belmonte Hills. Coming in as defending champions, the couple posted a net, four-round score of 265, winning the event again by 13 strokes over the next nearest team earlier this month. Charene said winning is fun and the couple enjoy that experience, but the sport provides so much more.

“I love the competition, I love being outside, I love the game, I love what it offers,” she told Golf Saskatchewan over the Easter long weekend at their Regina club, Tor Hill. “I love that we get to play together, it’s four hours we get to spend together. We support each other in the game.”

The Kozaks began taking spring vacations in Bermuda five years ago when they decided to have their vacation include playing golf rather than “just spending a week sitting under a beach plalapa with a drink.” They decided to find a golf tournament to play in leading them to the Pompano Beach Club tournament.  They first competed in 2015; they missed 2016 due to an injury Charene suffered but have since competed every spring. On route to their most recent championship, Doug was able to sink an ace during the final round capping another memorable tournament.

“One of the fun facts this year was that I got a hole in one in the last round,” he said. “I’m telling people it’s my first international hole in one. I have four.”

Aside from their success in the mixed format tournaments the couple praises the people they’ve met and the now lifetime friends they have gained. One of those is a couple who lives in Pinehurst, North Carolina. That couple shared the news of a mixed event in nearby Southern Pines at the Pine Needles Lodge and Golf Club. They entered the tournament and managed to win that event in November 2018 as well. Doug said sometimes the pieces fall in place with your partner.

“The beauty of these mixed events is there is formats where you only record one score. The bad ones you put in your pocket and lean on your partner. We’ve been lucky enough to ham and egg it a little bit,” he laughed.

The couple are also past champions of the Golf Saskatchewan Mixed Championship, they won that event in 2007 at Elk Ridge.

The couple has a cottage at Waskesiu and plays in the Lobstick events every year. Unfortunately, the 2019 Ladies Lobstick conflicts with the provincial mixed championship this year so they will miss seeing  their friends and regular Mixed Championship competitors at Golf Kenosee in August.

Doug said he is retiring from his shopping centre management job in May and the couple will spend more time in Prince Albert National Park playing the sport that keeps them close, social, and active.

“We always say the best thing about golf is you pick the people you get to play with when you play socially. You get to go for a four hour walk with your friends and if you can’t have a good time doing that you should pick something else,” he said.