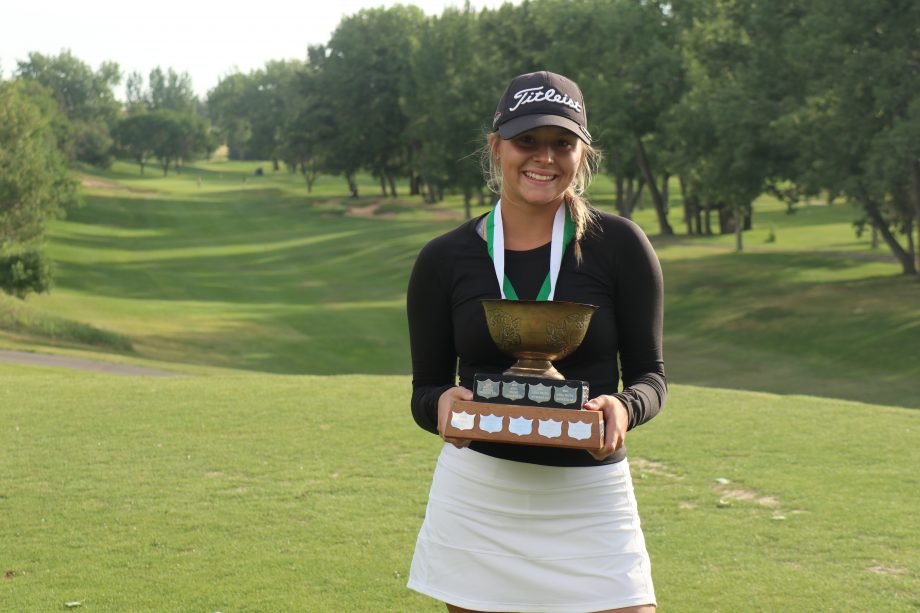 The 15-year-old Yorkton golfer took the lead into the final round on Thursday at Swift Current’s Elmwood Golf Club and needed every shot to claim the win. Kozak was pushed by Autumn Neiszner all the way to the 54th hole but Kozak’s final hole par and round of 77 was enough to edge Neiszner by a shot. She said winning the championship is a special moment.

Kozak battled from behind after round one to take the lead at the 36-hole mark of the championship. With a two shot lead on the final hole she admitted there was some nerves.

“I was pretty nervous but I tried to zone out like what I usually do when I’m in that situation and it ended up being okay. It was close but I won.” she said.

Kozak’s win gets her into an exemption in the Canadian Amateur Women’s Championship in Spruce Grove, Alberta from July 27 – 29.

Neiszner will join Kozak at nationals as will both Alex Schmidt and Brooklin Fry who tied for third at provincials.

The complete results of the championship can be seen here.

Klughart led wire-to-wire this week in Swift Current to claim the win with a three round score of 8-under, 208. North Battleford’s Scott Thompson placed second three shots back. Klughart said after the round that holding onto the trophy is something he’s proud of.

“Obviously you try to defend your title, it feels pretty special to do it three times. I was very was humbled to get the first one so to get three in a row feels pretty good,” Klughart said.

With the win Klughart receives an exemption into the Elk Ridge Open in September. The tournament is a newly announced stop on the MacKenzie Tour.

Klughart will head the Saskatchewan contingent to nationals from Aug. 24 – 27 in Fort McMurray. Thompson claims the silver medal, Saskatoon’s MIchael Smith placed third at 1-under par.

Timmerman moves one round closer

Saskatoon’s Roman Timmerman continues to have a stranglehold on the Men’s Amateur Championship.

Timmerman followed his record round of 63 with a solid 4-under, 68 on Thursday leaving himself with an eight shot lead over 2020 champion Ty Campbell. Klughart is in the hunt for his second am win at 8-under.

2018 winner Kade Johnson sits fourth at 7-under, Thompson is fifth at 5-under.

The complete results can be seen here. The final round begins at 8 a.m. on Friday.