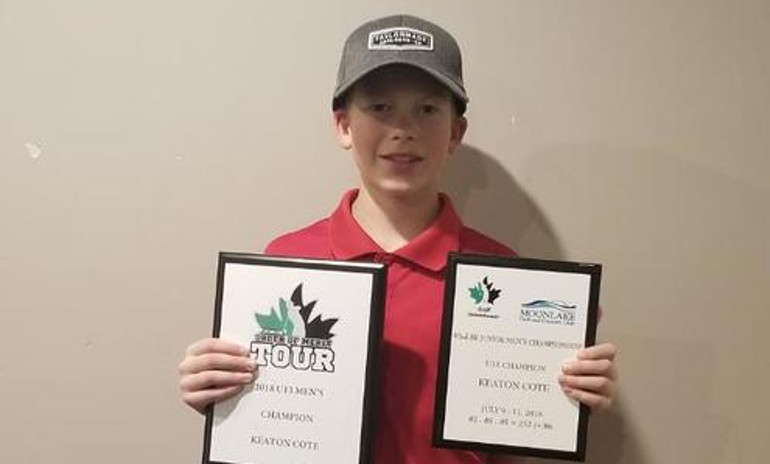 A young Kindersley golfer is celebrating a championship season.

Keaton Cote is the 2018 Golf Saskatchewan under-13 Order of Merit (OMT) champion. Kote has been competing in tournaments for four years. He said claiming the OMT championship was a pleasant surprise.

“I was hoping to win once or twice, I played on the Maple Leaf Tour (MJT) and was hoping to get some good scores there,” he said.

Cote played four MJT events winning once. He placed second twice in his age group as well as picking up a third-place finish in the OOM Championship. The now 13 year-old placed 30th at the Golf Saskatchewan Junior Men’s Championship. Cote is following in his older brother and father’s footsteps when it comes to the game. He said winning the under-13 division wasn’t expected.

“I was surprised because Darien Herlick played really well.  It was great to get the trophy, I’m happy I got it. Maybe I can do it again in a couple years,” he said.

Cote will play in the under-15 age group next season. He said he’s looking forward to steadier competition and longer rounds.

“I’m excited, it’s going to be difficult, it will be harder but hopefully I can gain a few yards over the winter and make my overall game a bit better,” he said.

Cote will visit the Golf Dome over the summer to work on his game, but hockey takes over his winter schedule.